The history of Surrey’s monasteries, abbeys and priories

King Henry VIII’s Dissolution of the Monasteries between 1536 and 1541 was devastating but it has left this county with many spectacular ruins. Stephen Roberts takes a tour 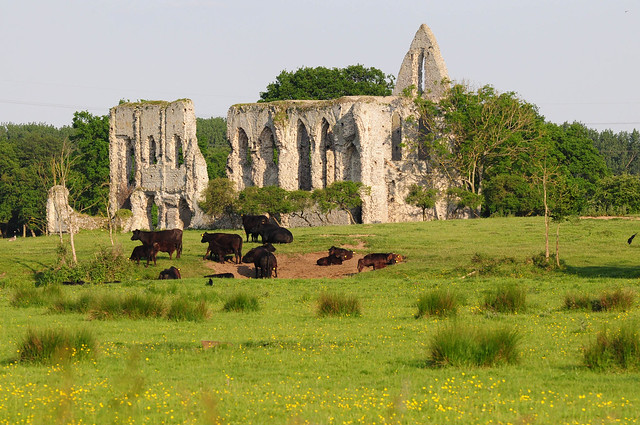 Monasticism came to Surrey early; around the mid-17th century. Of course, corpulent, piggy-eyed monarch, Henry VIII, has a big stake in this tale.

Desperate for a son and needing a divorce from barren Catherine of Aragon, he invoked the break with the Pope, the abandonment of Roman Catholicism, the establishment of an English Church and our Reformation.

In the wake of this came the Dissolution of the Monasteries, as Roman Catholic houses were closed, their monks turfed out and rich proceeds distributed among the King and his cronies. There, the English Reformation in one paragraph.

One thing that Henry’s Dissolution gave us was some of the most romantic ruins the county possesses. This region was no great focus of monastic life, as it was ‘economically marginal’ at that time, something which didn’t change until the railways came. There may not be many then, but there are some beauties… 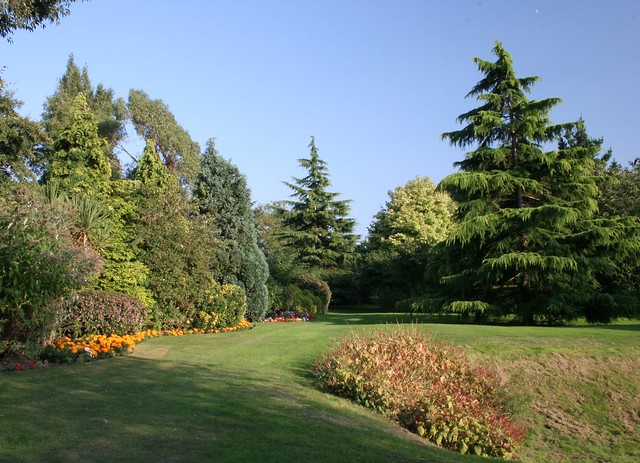 This is where it started, with an abbey founded in 666 AD. Ravaged by the Vikings around 872, it was re-founded by Benedictines in 964, then dissolved in 1537.

Regarded as Surrey’s ‘senior’ abbey, the first established in the county, it was also the major landowner among our abbeys. As the original burial place of King Henry VI, Chertsey Abbey also drew an honourable mention in Shakespeare’s ‘Richard III’ (Act 1, Scene 2).

The abbey ruins lie at the back of Abbeyfields Recreation Ground, but sadly there is little to see. The best known features are the fish ponds, although only three of seven have been traced. Part of the moat around the Abbey Precinct survives, but again, some sections have been lost.

There is little stonework to be seen in its original location, just a few low walls and evidence of kilns or ovens to the west of Ferry Lane. It is a poor return for what was once Surrey’s most famous abbey. Dissolution was often followed by pillaging of stone. I hoped for better luck and more substantial ruins elsewhere. 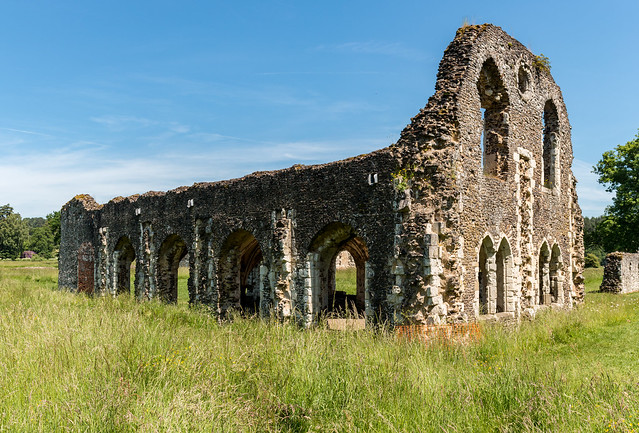 What a place is Waverley, the first Cistercian abbey built in England in the early 12th century. Although robbery of the stone was also drastic here, much remains, including parts of the monks’ dormitory, chapter-house, south transept of the church (which was almost 300 feet long) and infirmary chapel. In all, the site covered some 50 acres. 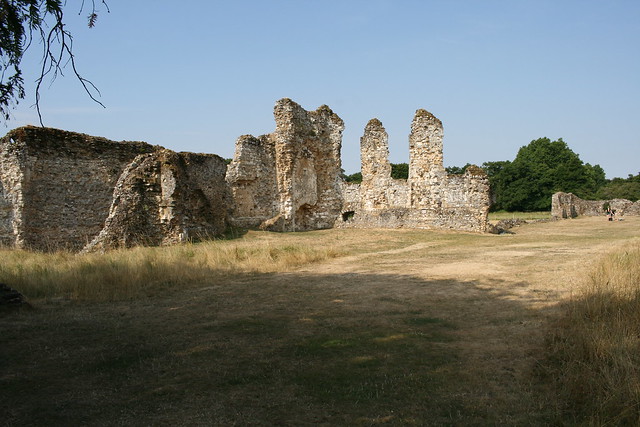 Florence Nightingale’s family owned the site in the 19th century. Waverley has been a backdrop in films, such as Elizabeth, the Golden Age (2007), and featured in a Conan Doyle novel. However, the jury is out as to whether the abbey inspired Sir Walter Scott’s ‘Waverley’ novels; it would be great, as these ruins would be responsible for Edinburgh’s ‘Waverley’ station.

Loseley House, an Elizabethan mansion, three miles south-west of Guildford, is one of the culprits where Waverley’s missing stone is concerned. It was built by Sir William More, a kinsman of Sir Thomas More.

For such a peaceful spot, it is surprising to find relics of war, but there is a gun emplacement at the car park and tank-traps by the river. Had the Germans invaded in 1940, this is one place we would have attempted to throw them back. 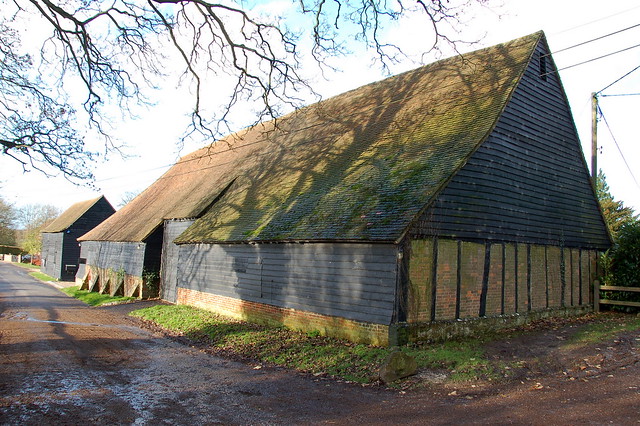 Those Waverley Cistercians were busy, for Wanborough was a ‘grange’ (an outlier) of theirs.

It was founded in 1130 and was dissolved with the abbey.

The Cistercians were noted for farming and ‘granges’ were created when the land was far enough away to justify a smaller, ‘junior’ monastery.

Wanborough is all about its Great Barn, which was restored in 1997 and looks resplendent. The barn is just under seven miles from the abbey, located on the other side of today’s A31. 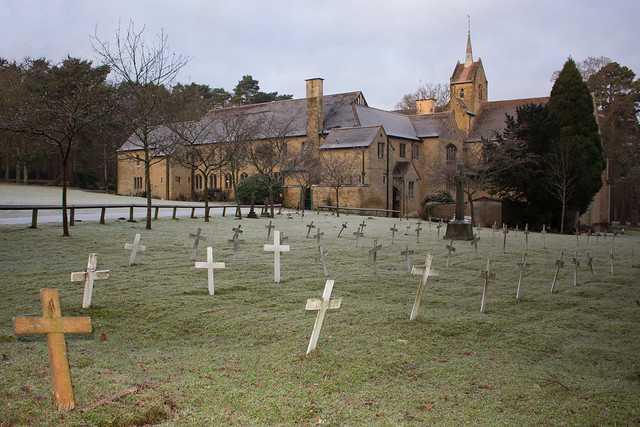 This extant monastery was originally a Franciscan Friary from 1892, the church designed by architect Frederick Walters (1849-1931), who died in Ewell.

According to Dom (‘Dominus’) Basil Watkins, there are fewer than 10 monks at Chilworth today, which means they all must have a bit of the ‘Jack of all trades’ about them.

Their working day starts at 5:30am and doesn’t finish until after the evening service of Compline (around 8:45pm).

To get the best views, you need to park in the car park on Newark Lane, cross the bridge, and take the pleasant towpath walk by the canal.

Although there has been the usual despoiling, there are still substantial remains to be glimpsed through the trees, with the south transept and east end of the church prominent.

As an added bonus, there is Newark Lock, opened in 1653, next to the ruins. 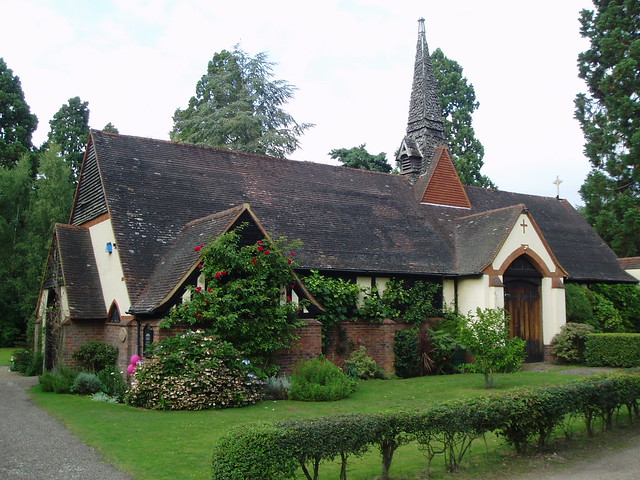 The Shrine (Saint Edward Orthodox) Church was founded for the sacred relics of Anglo-Saxon king St Edward the Martyr, slain at Corfe, Dorset, in 979 AD, possibly on the orders of his stepmother.

The church was built in 1908. Older still is the mortuary chapel, dating to 1854, effectively, right at the start of modern Woking. Father Niphon explains that the mortuary chapel is undergoing renovation. Beyond that is the living accommodation, added in 2007.

The church aptly has the appearance of an Anglo-Saxon wooden church. Inside is all colour and iconography and a space open to all. The monks tend their section of graves in what is a huge cemetery; either people they knew personally, or other Orthodox burials.

Here, amongst the memorials to Victorian worthies, in a sylvan environment where Mahatma Gandhi once attended a funeral service, the work of these few welcoming and humorous monks continues – look for the sign outside the church: “Warning! This church may contain nuts”.

- Waverley farmed the land, was prominent in the wool trade and also kept about 30 ploughs. By the time Waverley was dissolved its community had dwindled to 13 monks.

- Reigate Priory became a house (1541), which belonged to the uncle of Catherine Howard. The latest Palladian mansion (1771) is now used as a school and museum in Priory Park.

- Tandridge Priory was founded sometime after 1218 and dissolved around 1537-38.

- Guildford Blackfriars was founded in 1275 by Eleanor of Provence, the widow of Henry III. It was dissolved in 1538 and the site is now occupied by ‘The Friary’ shopping centre.

- Henry VIII was in Surrey when he approved the dissolution of the lesser religious orders.

- Composer Albert Ketelby visited Chilworth, inspiring him to write In a Monastery Garden.

- The parish church in Old Woking is probably the site of a monastery of Saxon foundation.

666 – Founding of Chertsey Abbey by the Benedictines.

1128 – Waverley Abbey founded by the Cistercians.