Hertfordshire is a county with a vast, fascinating and sometimes dark and bloody history that has reportedly lead to more than a few angry ghosts sticking around to wreak havoc and take revenge on the living. We have gathered 10 of the most haunted places in the county

Minsden Chapel is a ruined building in the wilderness near the small hamlet of Chapelfoot. It's not just the location that causes chills; the frequent sightings of the ghostly apparition of a monk climbing stairs, which crumbled some time before the 17th century, giving the illusion that he is climbing through the sky, has frightened many.

This is one of a few ghostly happenings that have been reported at the chapel and in its grounds. Others include the light of a cross blazing in the darkness and holy music playing without a discernible source.

Nicknamed "Cold Christmas Church" after the nearby village, St. Mary's and All Saints Church in the village of Thundridge, is supposedly haunted by various spirits including a dark figure seen roaming among the neglected gravestones. All that remains of this old place is the church tower after it was partially demolished in the mid 1800s but this abandoned place was once the heart of the village and dates back to the 11th century.

If you are planning a visit, prepare to encounter terrifying sounds such as the growling that has been reported coming from inside or even a ghostly army marching right through the old stone walls.

Stay a night at The Brock Arms in the sleepy village of Ayot St Lawrencefor a not-so-sleepy encounter with the paranormal. Historically a resting place for holy people taking the pilgrimage to St Albans, it's not surprising that there are reported sightings of phantom monks within the walls of the inn.

This is a pretty pub with delicious food, an open hearth fireplace, dark wooden beams and historic charm. Just don't be too alarmed if you encounter the ghost of a burning or a hanged monk in one of the rooms.

Located close to the border of Bedfordshire is the village of Markyate which is home to the grand Markyate Cell, a 19th century stately house with a mysterious story. It stands on the site of what was once a 12th century priory which would explain why a ghastly nun has been reported to haunt the grounds.

An even more fascinating phenomenon is the ghost of an infamous highwaywoman Katherine Ferrers who was taken back to the house after being shot during one of her escapades, where she died. It seems that Katherine is still causing trouble from beyond the grave!

One of the finest examples of Jacobean style can be seen at Hatfield House, childhood home of Queen Elizabeth I. It strongly evokes a time of luxury with heavy curtains, fine carved furniture, oil paintings and tapestries. Built in 1611, the façade of the house is truly breathtaking and is enveloped by meticulously kept gardens, a deer park and rolling woodland.

This place seems like the epitome of luxurious calm and sophistication… but there is a dark side to Hatfield. Supposedly, Elizabeth's spectral presence has been reported to be moving through the rooms of the old house and with her portraits hanging around the house, there is no escaping Lizzie here. 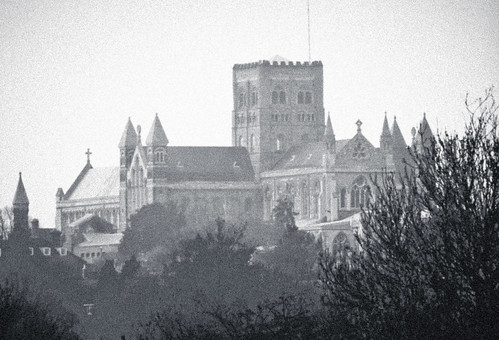 Where there's Christianity and worship, there inevitably comes reports of paranormal activity. Therefore, it is hardly surprising that the oldest site of continuous Christian worship - St Albans Cathedral and Abbey - in Britain has its fair share of reported hauntings.

Most prominent, and perhaps most chilling, are the reports of organ music being played when nobody is around. Also spotted was a procession of phantom monks floating through the abbey before disappearing through the wall.

Once the home to Victorian novelist Edward Bulwer-Lytton, there has been talk of spooky goings on at Knebworth House throughout its 500 year history. Bulwer-Lytton was a famed novelist during the 19th century and was a pioneer of the science fiction genre but also wrote in other genres including romance, horror and the occult. He had a strong interest in the occult and supposedly interacted with perpetrators of this way of thinking such as infamous occultist Éliphas Lévi.

It was at Knebworth House that a séance took place involving Bulwer-Lytton and, supposedly, Lévi which led to supernatural goings on. Bulwer-Lytton's spirit is said to still roam some rooms of Knebworth, much like a character from one of his horror stories.

8. The village of Datchworth

Upon visiting Datchworth, you might be surprised that some claim it to be "the most haunted village in Hertfordshire". Although it is a quintessentially Hertfordshire village, there have been horrifying rumours of a phantom cart that is seen creaking along Rectory Lane carrying dead bodies!

These are reportedly the bodies of the Eaves family who came to their grisly end during the 18th century famine that ravaged the land. Other reported hauntings include a headless horse that roams the fields nearby.

Built in 1640 as the home of Sir John Harrison, Balls Park Mansion in Hertford is a lovely Grade I listed building - which is now split into luxury apartments - that may have even influenced Jane Austen's novel 'Pride and Prejudice'. The mansion is a wonderful example of British architecture but it isn't without spooky tales of ghosts interfering in the land of the living.

When it was used as part of the University of Hertfordshire, many staff members reported seeing ghostly figures, most recognisable was the "grey lady", supposedly the spirit of a woman who committed suicide by throwing herself from the balcony at one of the windows. Her ghastly figure was reported to pass straight through somebody before re-enacting her untimely demise once more.

Not all ghosts are scary and sinister; take, for example, the Ghostly Nun who haunts Leahoe House. The house has been owned by Hertfordshire County Council since 1935, it is located next to the county hall and retains its beautiful exterior and many period features - including a few spirits!

In the 1980s, a man who had finished work at the house, and was the last person to leave, felt a terrible fear all of a sudden before coming face to face with the Ghostly Nun. In what would ordinarily be a shocking and horrifying encounter, the man was instead filled with calm and hope.