9 of Surrey’s most intriguing historic buildings

With its rich and diverse architectural heritage, Surrey has some extremely unusual and intriguing historic buildings. Here Andy Smith brings us a selection of the best 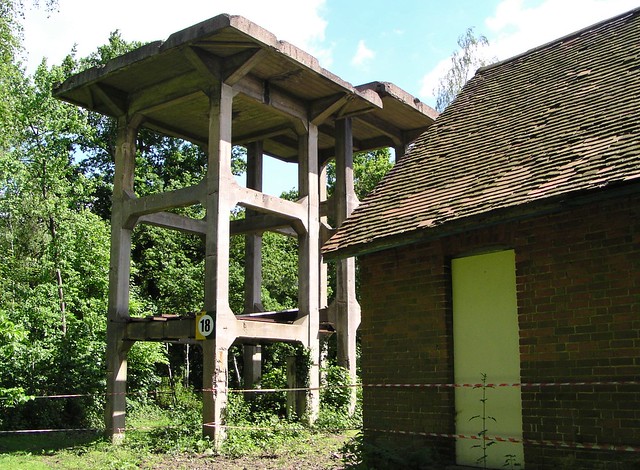 A little-known gem, the concrete anti-aircraft tower at Brooklands is an important relic of World War Two. It was built in 1941 to protect the Vickers and Hawker aircraft factories, which had already been bombed by the Germans on numerous occasions and which had suffered particular damage, and severe casualties, in a major raid in September 1940 at the height of the Battle of Britain.

After that, the decision was made to enhance the defences at Brooklands through the construction of this reinforced concrete tower, on which would be mounted a 40mm Bofors gun that would have a clear field of fire against low-flying raiders. It may not be one of the most attractive of Surrey’s historic buildings, but it is certainly an unusual reminder of the county’s experiences in wartime.

The Brooklands site is both a Conservation Area and Scheduled Monument, including the original 1907 motor racing circuit that made Brooklands famous worldwide. There is also a fascinating museum explaining the history of Brooklands and its significance in both motor racing and aviation, and the site is now also home to the London Bus Museum. 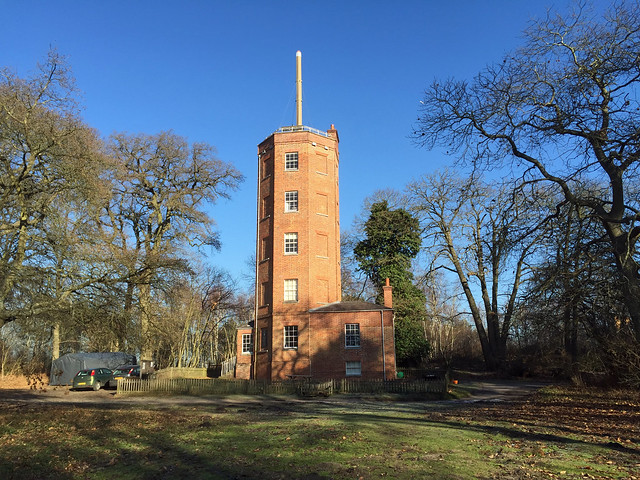 A distinctive octagonal tower on the top of Chatley Heath was one of the Royal Navy’s chain of semaphore towers that operated between 1822 and 1847, ensuring that signals could be passed between the fleet in Portsmouth and the Admiralty in London in under a minute.

The Chatley Heath tower is the best preserved of the remaining towers and has a still-working semaphore mast. It is 60 feet high, built of red brick and topped with a parapet. It was vandalised and damaged by fire in the 1980s; it was restored by Surrey County Council and the Surrey Historic Buildings Trust.

Nowadays, the tower is open to the public on Sundays during the summer and is well worth visiting. It contains hands-on working semaphore models and displays on 19th-century naval communications. In addition, the tower is located in the midst of a beautiful nature reserve comprising 800 acres of unspoilt heathland and ancient woodland, Wisley and Ockham Commons, managed by Surrey Wildlife Trust. 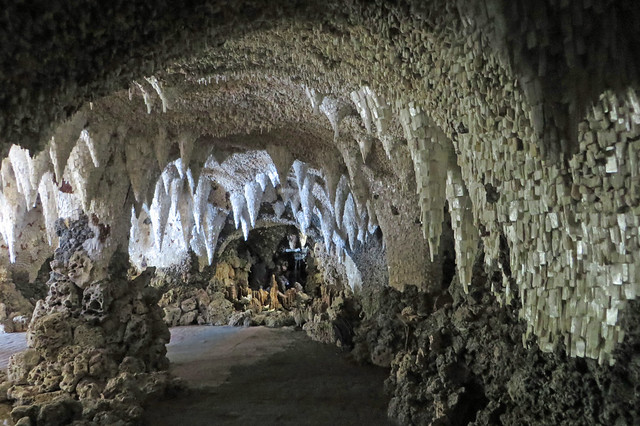 One of an extraordinary collection of 18th-century ‘follies’ in this spectacular landscape garden on the outskirts of Cobham, the Crystal Grotto has recently been restored to its former glory. It is now open to visitors every weekend, offering a unique opportunity to see a truly dazzling array of hundreds of thousands of crystals, including calcite, gypsum, quartz and fluorite.

It is easy to see why the Honourable Charles Hamilton, who conceived Painshill Park, intended the grotto to be the sparkling centrepiece and highlight of his gardens.

Among the other fascinating features at Painshill are the Ruined Abbey, the Turkish Tent, the Gothic Temple and the Gothic Tower – all built in the mid-18th century and also recently restored so that we can see them today as they would have first been viewed in the 1760s, during the ‘Age of Enlightenment’. 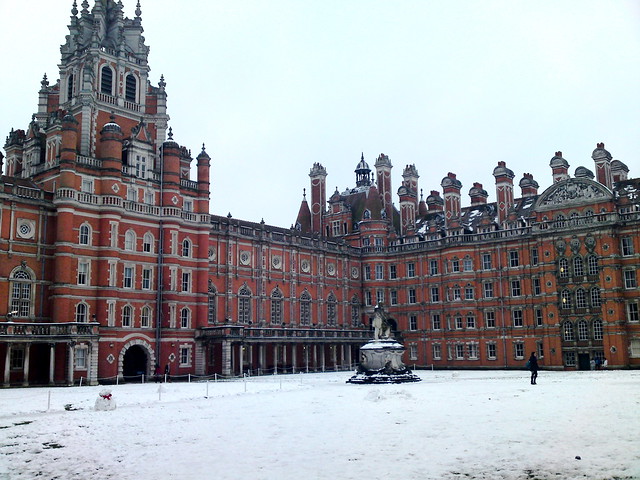 Impressive and awe-inspiring, the Founder’s Building at Royal Holloway, University of London, dates from the 1880s and was built as a gift to the nation by the Victorian entrepreneur and philanthropist Thomas Holloway.

It is rare in Surrey, and indeed England, in that it was designed by the architect William Henry Crossland in a flamboyant and distinctively French style, specifically inspired by the Chateau de Chambord in the Loire Valley. The building was officially opened in 1886 by Queen Victoria (of whom there is a very striking statue in the building’s north quadrangle), and it was Victoria who allowed the college – at that time exclusively for women – to use the title ‘Royal’ in its name.

The Founder’s Building dominates the entire RHUL campus and is highly visible from miles around, but it is not just its magnificent exterior that has the wow factor; inside is a picture gallery containing a priceless collection of more than 70 of the very finest Victorian paintings. 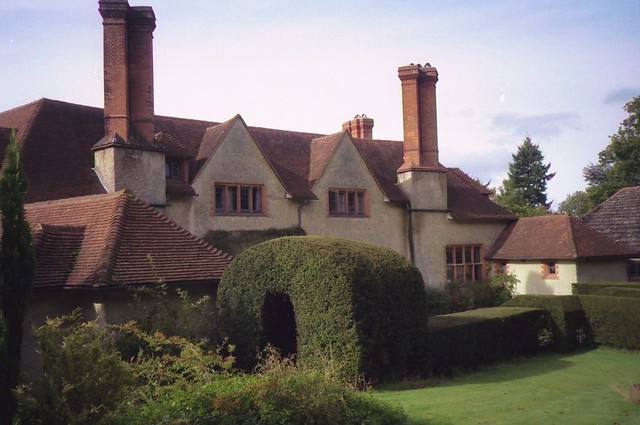 Located in the heart of the Surrey Hills Area of Outstanding Natural Beauty, Goddards, an absolutely stunning country house in the traditional ‘Surrey style’, could easily be mistaken for a much earlier building.

However, it was, in fact, designed in the 1890s by Edwin Lutyens (also architect of the Cenotaph in Whitehall and the Government Buildings of New Delhi) and enlarged by him in 1910. Today, it is considered one of his most important buildings and is also significant for the gardens, which were laid out by Lutyens’ long-time collaborator, Gertrude Jekyll, who herself lived in Surrey. 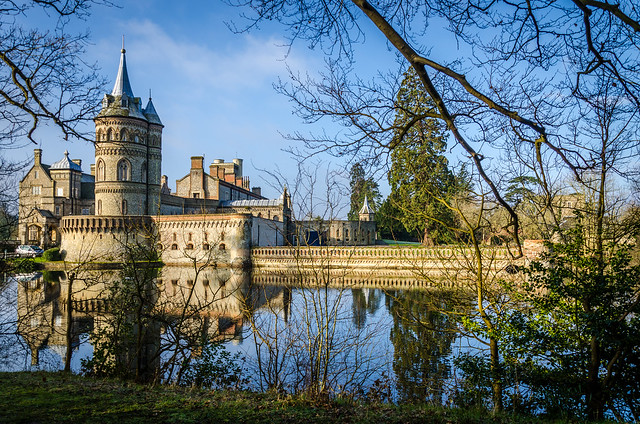 Straight out of a fairy tale, the medieval-style Horsley Towers dates from the 19th century but could just as easily belong to an earlier era. Built in several phases between the 1830s and 1860s for the Earl of Lovelace, the main building was designed by Sir Charles Barry, the principal architect of the Houses of Parliament.

A truly extraordinary construction, its medieval character is emphasised by its combination of flint and brick towers and turrets, its castellated gateways, it's Great Hall, and the large windows emblazoned with the Lovelace family’s armorial bearings.

Horsley Towers’ elaborately patterned cut-brick and flint walls are in keeping with the rest of the Lovelace Estate, in which is also located the family mausoleum – another extremely unusual and striking building – and a network of 15 horseshoe-shaped ‘Lovelace Bridges’. The mausoleum and bridges were, in fact, designed by the Earl himself, as he was a keen amateur architect. Horsley Towers is now a DeVere hotel and venue called Horsley Park.

While it may not be the most exciting building in the world at first glance, this strange little structure actually has a fascinating history.

Built not as a chapel but as a barracks for riflemen in the Napoleonic Wars, it was originally constructed in Horsham, but was then moved, piece by piece, to Charlwood after the Battle of Waterloo brought the wars to an end.

It functioned then as the local Baptist chapel for almost two centuries before being purchased, restored and preserved as a community facility by the newly-formed Providence Chapel Charlwood Trust in 2012. 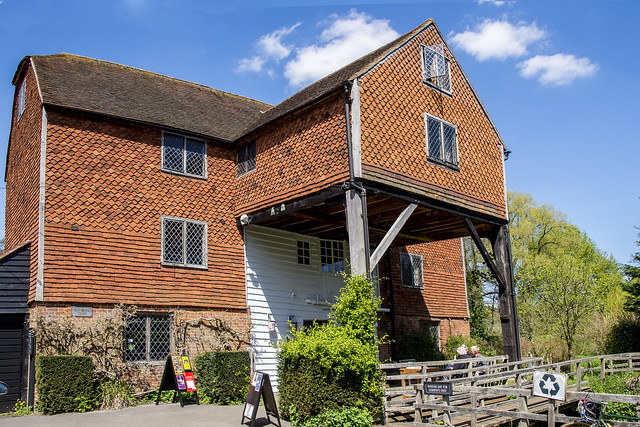 A timber-framed watermill dating from the Georgian era, the peaceful Shalford Mill hides a colourful history – it was once the HQ of the notorious Ferguson’s Gang, a secret group of female philanthropists who raised funds for the National Trust in the early 1900s.

When the building was in danger of being demolished in the 1930s, the mill was saved by gang leader “Bill Stickers” (real name Peggy Pollard), who persuaded the owner to donate it to the National Trust on the understanding that the group would raise the money for its repair and future running costs.

It was still the HQ of the gang as late as the 1960s! Today, the building continues to be owned by the National Trust and is open to the public at various times. 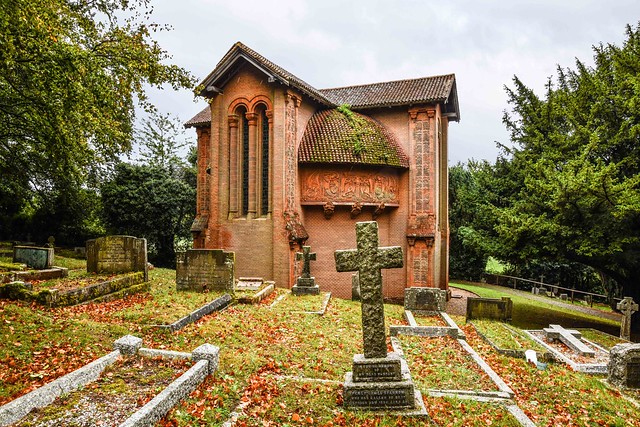 Long a Surrey Life favourite, this stunning red-brick and terracotta-tiled building, covered in Celtic and ‘art nouveau’ decoration, seems perfectly at one with its tranquil surroundings. Both inside and out, its intricate design makes it one of Surrey’s most unusual small buildings.

It’s all thanks to Mary and her artist husband, GF Watts, who rest here in the Compton Cemetery, together with many others who have played a role in the Compton Artists’ Village over the years. In 1895, Mary Watts began to run evening terracotta classes at the nearby house and art studio (now the Watts Gallery), teaching locals how to model tiles from Surrey clay with the beautiful and symbolic patterns that she had designed to decorate the walls of the chapel.

Pottery classes are still run today at the Artists’ Village. GF Watts financed the chapel's construction through painting commissioned portraits and presented it as his gift to the village of Compton. The chapel remains a working village parish church to this day and is open to visitors all year round.

The Surrey Historic Buildings Trust is a registered charity that helps to preserve historic buildings in our county.

Since their formation in 1980, they have provided over £500,000 in conservation grants and have played a leading role in promoting awareness of Surrey’s unique and diverse architectural heritage.