With Halloween just around the corner, we bring you the definitive guide to Surrey’s most haunted places.

Warning! Many of these spooky stories, which date back centuries, are historically/geographically inaccurate, but can still be investigated with a sense of fun…

According to local folklore, an eccentric sword-wielding officer, Major Peter Labelliere, roams the summit by his grave, where he was buried upside down, as instructed in his will, in 1800. Another phantom rider has been spotted galloping across Box Hill at night whilst weary pilgrims have been seen stumbling over the Stepping Stones that cross the River Mole.

Legend has it that a prisoner held captive in the fortified manor house escaped, and the proprietor, Lord Hope, gave chase. Spying a running figure in the shadows, the Lord ran him through with his sword, tragically killing his own son by mistake. The ghost prowling around is not, as one would expect, the slain son, but Lord Hope, wringing his hands in despair.

Cheam Rectory is apparently possessed by an 18th century former rector - while others say it is a bishop who lived there during the reign of Elizabeth I.

Nonsuch Park is haunted by shadowy figures and the sounds of merriment: perhaps guests attending banquets in Nonsuch Palace, which was razed in the 17th century. By the eastern gate, the spectre of a tall man in a black coat loiters.

Sir Thomas Moore is reported to roam Baynards Park, built by his uncle at the end of the 16th century. Henry VIII beheaded Moore in the Tower of London, after he repudiated his marriage to Anne Boleyn, and a headless Moore has been seen stumbling around the grounds of Baynards Park.

The Selsdon Park Hotel is apparently home to a ghostly maid, said to have committed suicide in the 1930’s, who has since appeared walking down the Tudor Corridor and was once glimpsed in a mirror by a guest.

At Old Croydon Palace, once the residence of the Archbishops of Canterbury and now a school, a weeping woman has been seen stalking the corridors in search of her lost child.

In Dorking’s historic West Street, several of the antiques stores are reportedly haunted. The most famous apparition, residing above numbers 58-60, is William Mullins, who owned a sizeable stretch of land adjoining St. Martin’s Church. In September 1620, he departed with 101 fellow Christian pilgrims for America aboard the Mayflower. Sadly, along with half the others, Mullins, his wife and son succumbed to the cold winter soon after their arrival.

The ninth Duke of Norfolk is said to haunt the White Horse Hotel, an old coaching inn. Tenants have encountered him drunkenly roaming the corridors at night, too intoxicated to return to his lodgings at Deepdene House.

Pippbrook House, now the offices of Mole Valley District Council, was constructed on the site of a manor house, built in 1378. A lady in a long grey dress regularly descends the stairs, above where the Social Care Team now has offices, and a butler stares out of a window.

A headless horse rider in black follows an original track in the vicinity of Dorking Graveyard, galloping across the headstones into the hedges.

Ewell is reputed to have several ghosts that congregate around the old town lock-up, on the Church and High Street junction.

Neighbours have heard the clatter of a coach and horses outside the William IV Inn.

One centuries-old shop in the high street, previously Pisces Embroidery and more recently a beauty salon, is apparently inhabited by a female ghost called Agnes.

At the opposing end of Church Street, several young plague victims purportedly haunt their graves in the churchyard of St Mary The Virgin.

Vernon House, now the site of Farnham Library, is said to be the final resting place for the ghost of Charles I. The reigning monarch was held there by Parliamentary troops in 1649 before being taken to London for execution by Cromwell’s republican forces.

Latin prayer and singing have been heard emanating from St. Andrew’s Church and an elderly lady walks the churchyard.

Farnham Castle, now a conference centre, has several supernatural visitors. As well as being home to a ghostly monk, phantom voices have been heard in the Great Hall and children have been observed running the length of the upper balcony. A bell that was once housed in the keep is often heard tolling, a shadowy figure haunts the guardroom and a young girl dances on the staircase, where she was said to have tripped and died. In the cellar, a soldier who was shot in the face causes visitors to experience face-aches.

Located on the cobbled high street, the historic Angel Hotel is reported to have several ghosts, including a 19th-century Eastern European soldier and a spectral nun on the staircase. Guests have also seen lights switching on and off in the rooms.

The building that is home to clothes shop Monsoon, also on the high street, was once part of the Guildford House of Correction, which included prison cells. An elderly Jewish man, Issac of Southwark, apparently haunts an underground cellar, and a ghost is believed to occupy the first floor.

At Guildford Castle, a woman in a long Victorian period dress has been glimpsed strolling around the grounds. Within the old stone keep, dating from Henry I, a phantom woman was also seen standing at the top of the staircase. More recently, a distressed child claimed to have seen a man hanging by chains attached to the wall. The basement was once used as a gaol where prisoners were, indeed, shackled to the wall.

Reported to be the most haunted building in Surrey, paranormal activity detected here includes a King Charles spaniel; a man on the stairwell; fresh footprints; scents of roses and fireplace ashes; and a wheelchair that moves by itself in the Tollemarche room.

Sir Christopher Wren, the designer of St. Paul’s Cathedral, who lived at Hampton Court from 1668 until 1723, allegedly paces up and down the staircase of the Old Court House.

The ill-fated second wife of Henry VIII, Anne Boleyn, is rumoured to walk the passageways of the palace. Henry had her beheaded so he could marry Jane Seymour, whose own ghost, dressed in a long white robe, returns every October 12 - the date she died in 1537, twelve days after giving birth to their son. She has been seen walking through the cobbled courtyard carrying a lighted taper.

Sybil Penn, foster mother and nurse to Henry’s sickly son Edward, is reported to haunt the rooms she once lived in.

Catherine Howard, Henry VIII’s fifth wife whom he executed for adultery, has apparently been seen running along the gallery.

A hoax CCTV image was released in December 2003, purporting to show a ghostly hooded figure opening a fire escape and walking through.

The dominant ghost here is a woman in brown who has been seen on the stairwell. Some say she commutes to Baynards Park nearby, to commune with their primary phantom, the headless Sir Thomas Moore, but whoever heard of ghosts paying visits to each other?

Reigate Priory, seized by Henry VIII as part of his dissolution of the monasteries, supposedly has a 12th-century priest lurking on the premises.

In St. Mary’s Church, home to the Cranston Library, England’s oldest public lending library, singing has been heard after hours and a girl walks up the churchyard path.

Located in Egham, Royal Holloway University was founded in 1879 as a women-only college by millionaire medicine patentee Thomas Holloway. Students claim Holloway himself haunts the quadrangle within the Founders building, in the form of a black cat, although others have seen it in the Athlone halls of residence. Thomas’s wife Jane is said to wander the fourth floor of Founders, while a suicide victim haunts the top floor of the Williamson halls of residence.

At Brooklands Racetrack, race driver Percy Lambert achieved the land speed record of 103.84mph on February 15, 1913. Despite promising his fiancée he would not make another attempt to improve this speed, he died a few months later in a crash after his tyre burst at Brooklands, doing just that. His ghost has been seen pacing the track and strolling into ‘The Vatican’, a large hangar where he stored a vehicle, in a full racing outfit - leather coat, cap and goggles. Others claim he has been seen racing in his car, sometimes accompanied by the sound of the engine.

At Oatlands Park Hotel, many people have observed a ‘grey lady’ in a 17th-century crinoline dress walking across the restaurant before disappearing through a wall on the western side of the hotel, into the accounts’ department, where bay windows used to lead to the garden.

Room 1313, on the third floor of the Tudor Wing, is reputed to contain a maid who committed suicide after jumping off the bell tower where she barricaded herself during a lovers’ tiff - right above room 1313. 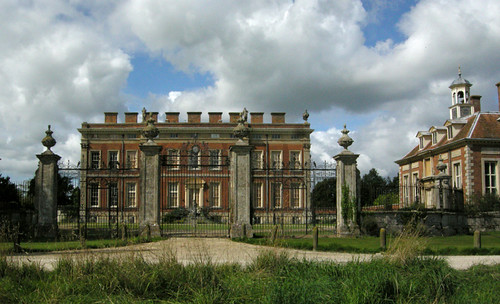 Rotating door handles and creaking floorboards have been heard in an upstairs room.

In nearby Deerleap Woods, the Bishop of Oxford & Winton, Dr Samuel Wilberforce (son of the anti-slavery campaigner William), was fatally thrown from his horse on July 19, 1873. Four residents claimed to have seen the bishop peering in through the Wotton House dining room window at approximately the moment of his death in the forest to the north, despite his never having visited the premises.

Have you got a spooky story to tell? Let us know in the comments!