The story behind Worthing Pier and Sussex’s other piers

As Worthing’s beloved landmark is awarded the title Pier of the Year, Sebastian Oake examines the fortunes of Sussex’s celebrated seaside structures 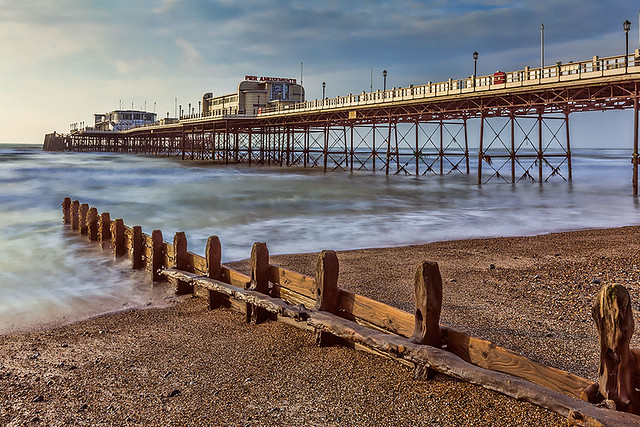 On Worthing seafront lies a distant relative of the Empire State Building. It is true.

At first it might seem that Worthing Pier and the New York skyscraper could not be more different, their irreconcilable orientation surely a sign of chalk and cheese, but they have one key thing in common: architecture.

Both display Art Deco design, which came to prominence in the 1920s and 30s. Worthing Pier’s distinctive Art Deco Southern Pavilion and amusement arcade have long earned it fans but now formal recognition has come with the title Pier of the Year, bestowed by the National Piers Society.

Art Deco itself ushered in a modern look at a time when the machine age was transforming culture. In both external and interior design, it largely rejected pretty, intricate patterns and subtlety in favour of symmetry, straight lines, chunky shapes, vivid colours and assertiveness. It embraced technology and made greater use of new materials, including aluminium, steel and chrome, and manufactured, rather than hand-made, fixtures, fittings and furniture. 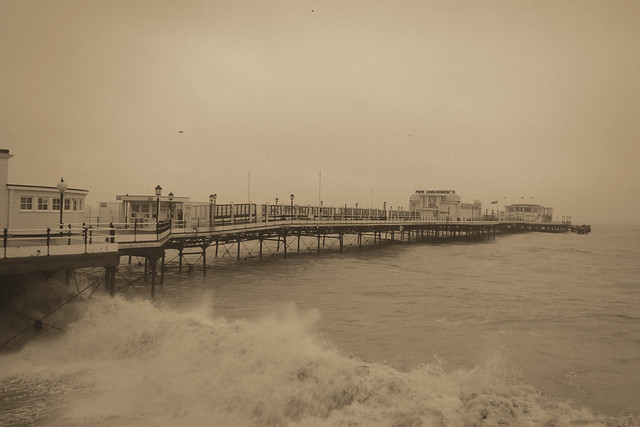 In its heyday, Art Deco expressed luxury, glamour and exuberance. It was a statement of faith in the modern world and trust in progress. Perhaps the most dramatic example of Art Deco architecture is the Empire State Building, with its audacious, box-like structure. Similarly Battersea Power Station, with its theme of big, bold and brazen, is Art Deco.

Worthing Pier may seem a little brother to those two but it is hugely popular with sightseers and a respected focal point of the town.

Most piers were originally built as landing stations for pleasure steamers and ideally had to be long enough to accept vessels at low tide. They were part of the Victorian seaside leisure boom and many sprang up quickly after the railways arrived, becoming ostentatious attractions and places to be seen in Sunday outfits.

Later they became more down-to-earth providers of fish and chips, candyfloss, saucy postcards and delightfully tacky summer fun, which continued unabated until the early 1970s, when cheap package holidays abroad challenged their appeal. All have had to adapt to stay alive. 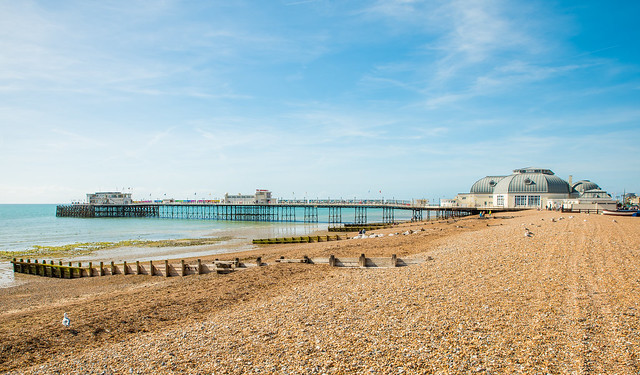 Always somewhat delicate too, and rather helpless in the face of nature’s elements, piers have long suffered at the hands of storm and fire and Worthing Pier, originally opened in 1862, has been no different. In 1913 the pier-head Southern Pavilion became marooned when the decking collapsed.

It was soon repaired and in 1926 the shoreward end pavilion was added, built in a style to complement the original Southern Pavilion. But in 1933 the Southern Pavilion burned down. This may, however, have been fortuitous in the long term because it allowed the prevailing Art Deco movement to stamp its mark on its replacement. The classic Southern Pavilion we see today opened in 1935 and a matching amusement arcade came two years later.

In wartime the pier had to close and it remained shut until 1949. After that, steamers started calling again and PS Waverley and MV Balmoral still moor up, although both ships are currently being refurbished and are temporarily out of service.

In 2014 local businessman Phil Duckett gave the Southern Pavilion a complete facelift while carefully conserving its original features and style, turning what had been a notorious nightclub into a widely admired multi-purpose venue. Today the pier is a Grade II listed building.

The Pier of the Year award has added to the air of confidence in the pier today. It is actually the second time Worthing has received the title, having previously won it in 2006. The award itself is the result of a vote of the 900 members of the National Piers Society, which aims to promote interest in the preservation and enjoyment of seaside piers.

According to the society, of the 100 piers that once graced our coastline, just over half survive and several of those face an uncertain future. In Sussex three piers have been lost: Brighton West, Brighton Chain and St Leonards.

Last year’s winner of Pier of the Year was South Parade Pier in Southsea, Portsmouth. This year around 30 were nominated. Anthony Wills of the society explains there are no judging criteria as such. “The only requirement is that the pier must be open for business,” he says.

“It’s a pretty good achievement for Worthing – only a handful of piers have won more than once.” Reasons given for members voting for Worthing – apart from its architecture – include “always in pristine condition”, “good entertainment” and “well-used by all ages”. Anthony himself singles out the refurbished Southern Pavilion. “It has been totally transformed and is now a very beautiful place. You can have afternoon tea, go to a concert or even get married there.” 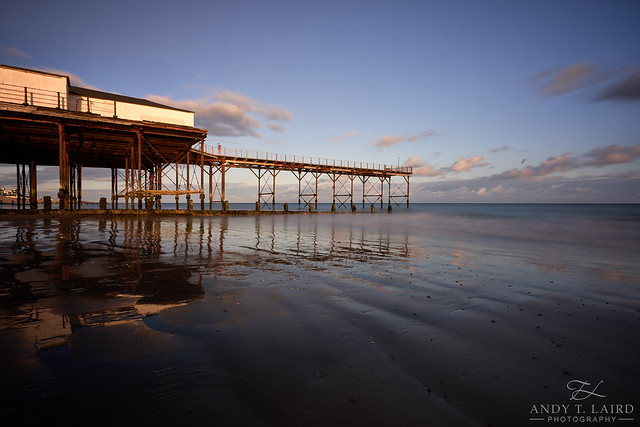 Worthing is, of course, not the only pier in Sussex. The other surviving piers are Bognor Regis, Brighton Palace, Eastbourne and Hastings, the latter three also previously winners of Pier of the Year.

“There is still a whole deck of cards of piers in Sussex,” says Anthony. “Sussex is well endowed with them. You have the brashness of Brighton and the gracefulness of Worthing, while Eastbourne is structurally beautiful – it is the most handsome on the south coast.”

Anthony also talks up the value of piers in general. “Some say they’ve had their day, that they’re old-fashioned, but they’re still family destinations and rendezvous places. They have all evolved to stay in business and people still find an attraction in walking over water.

I always say piers are about having fun. They are places of relaxation and entertainment in whatever form it takes and are very important to the resort offering.” 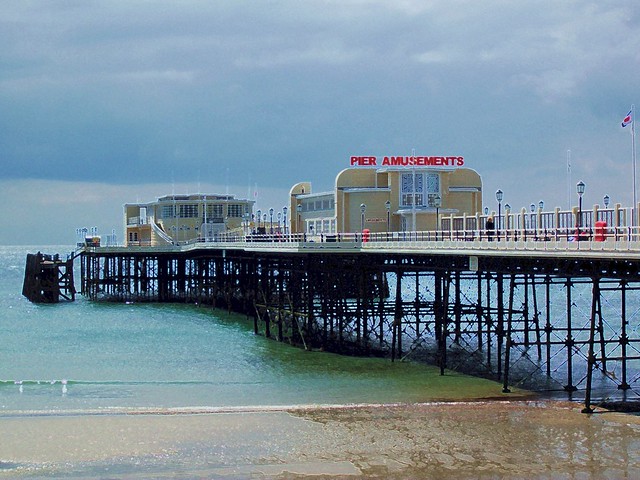 At Worthing Borough Council, which owns the local pier, there is a sense of pride in winning the Pier of the Year award. In April, the patron of the National Piers Society, Dame Joan Bakewell, presented the certificate to the Mayor of Worthing, Paul Baker. The council’s Head of Environmental Services, Andy Edwards, says: “We were delighted to win because this award is voted for by aficionados.

“It reflects the quality of our pier. This is an iconic structure and is a main attraction in the town. The pier has something for everyone. It also features positively in people’s memories – people perhaps remember going there as children with their grandparents.

“The council is committed to its upkeep because we recognise its importance to the town in terms of heritage and the visitor economy.”

It is clear the affection in which Worthing Pier is held locally. In this respect, perhaps it beats the Empire State Building hands down. Or should that be lying down? 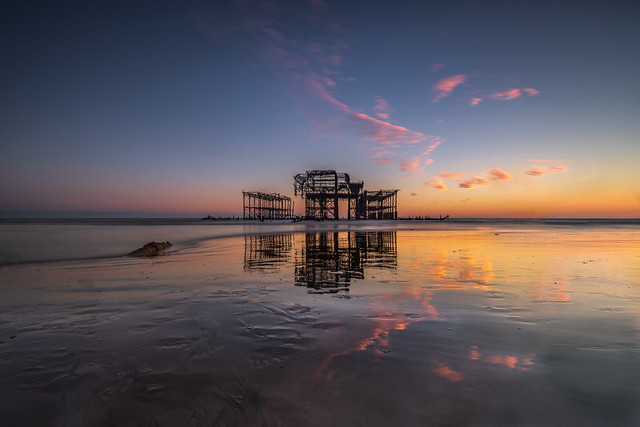 • Brighton Chain Pier - This suspension pier consisted of four 260-foot spans and opened, long before many others, in 1823. It was sited to the east of today’s Brighton Palace Pier. Sailing ships called originally but they were soon replaced by passenger steamers. Amongst the visitors was King William IV but by the 1860s, damage, neglect and the opening of Brighton West Pier sent it into decline. It was destroyed during a storm in 1896.

• Brighton West Pier - The West Pier opened in 1866 in front of where the British Airways i360 is today. Its heyday came after a concert hall was added in 1916 but the pier closed in 1975. Despite various plans for restoration and Grade I listed building status, it became increasingly derelict, especially as a result of storm damage between 2002 and 2004 and two serious fires in 2003. There is little left of it today.

• St Leonards - Built close to St Leonard’s Church, this pier opened in 1891. Its pavilion could seat up to 700 and offered a variety of entertainment. Like others, the pier was closed and cut into sections in World War II but remained closed afterwards. After suffering severe gale damage in 1951, it was demolished later that year.

How the Goosnargh Gin distillery bounced back from adversity

10 of the best beaches for swimming in Devon