The town of Bideford in North Devon has an unusual claim to fame, for it was the home of the last women to be convicted of witchcraft in England. David Pilling tells their tragic story 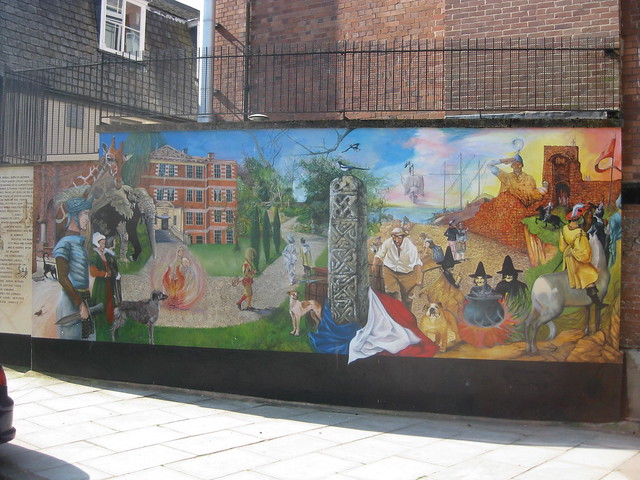 The story of how Temperance Lloyd, Mary Trembles and Susanna Edwards came to the gallows is a tragic one that serves as a dark reminder of England's superstitious past.

By the late 17th century the witch-hunting craze had died down in England. Most witch trials after the Restoration in 1660 ended in acquittal, but the trial of the Bideford 'witches' was exceptional in that it ended with their execution. It was also remarkable in that the condemned women came from a relatively sophisticated provincial town: most witch-hunts occurred in isolated rural villages.

The story of the trial is preserved in the Book of Bideford, written in 1792 by a local historian named John Watkins.

Watkins believed that the women were the victims of hatred and ignorance, writing that 'there was always some poor devil, either on account of an unlucky visage, sour temper, or wretched poverty, set up as the object of terror and universal hatred'. It is certain that most of the evidence that condemned the women consisted of malicious rumour and hearsay.

Their misfortunes began on a Saturday in July 1682 when Thomas Eastchurch, a local shopkeeper, told the town constables that he suspected Temperance Lloyd of using witchcraft to cause the illness of a local woman, Grace Thomas. Lloyd was arrested and charged with suspicion of using magical arts upon the body of Grace Thomas and to have communicated with the Devil in the shape of a black man.

Others came forward to add to the list of accusations. One Anne Wakely reported that she had seen a magpie fly to Grace Thomas's bedroom window, and that Lloyd had told her she was sometimes visited by a bird that changed into the likeness of the black man.

Eastchurch added some extra spice by claiming that he heard Lloyd confess that the black man had persuaded her to go to Grace Thomas's house to 'pinch and prick' her. Grace claimed that on the night of 1 June she had suffered:

'Sticking and pricking pains, as though pins and awls had been thrust into her body, from the crown of her head to the soles of her feet, and she lay as though it had been upon a rack.'

She claimed to have suffered a similar attack on 30 June and afterwards seen a cat wander into Eastchurch's shop. The cat, she suggested, was another manifestation of the Devil.

Lloyd denied using magic to harm anyone, but fell into confusion as Grace Thomas claimed to have the marks of nine pin pricks in her knee and Lloyd admitted to driving a pin into a piece of leather nine times.

Two more women, Grace Barnes and Dorcas Coleman, also claimed to have suffered tormenting pains from Lloyd's witchcraft, and eventually she admitted to all charges. She also admitted to causing the deaths of three citizens of Bideford and blinding another in one eye.

Two more Bideford women, Mary Trembles and Susanna Edwards, were denounced by their neighbours, having been noticed in the company of Lloyd when all three were begging for food in Bideford. They were arrested and incarcerated with Lloyd, and crowds gathered to stare at the three suspects as they languished in the town lock-up.

Lloyd was sent to Exeter gaol on 8 July 1682 and was joined by Trembles and Edwards on the 19th. There they awaited trial for over a month until the justices arrived at Exeter.

By now the city was seized with curiosity about the witches and the streets rang with tales of their supernatural powers. All kinds of miracles were attributed to them and public hysteria was at fever pitch: Roger North, brother of Lord North, one of the judges due to preside over the trial, feared that "the country people would have committed some disorder" if they were acquitted.

The trial that took place on 19 August was, like all witchcraft trials, not conducted by the usual means. Witchcraft was considered a crime apart and suspicion alone was adequate grounds for accusation. Being absent from the scene of the crime was not a sufficient alibi, and it was permitted for children to act as witnesses.

Proof that could lead to conviction consisted of the discovery of an unnatural mark on the suspect's body, accusation by a fellow witch, or evidence given by those who had supposedly witnessed the suspect making a pact with the Devil.

All of these were relevant to the trial of the Bideford women - for instance, Temperence Lloyd was accused of having unnatural teats on her body for the Devil to suckle - but burden of proof was unnecessary for all three freely admitted their guilt.

The presiding judge, Sir Thomas Raymond, allowed his will to be swayed by the emotional atmosphere in the court and raised no objection to the jury finding the suspects guilty of all charges.

At no time did the women attempt to deny the fanciful charges against them. Instead they seemed to veer between weary resignation, terror at the situation they found themselves in and genuine conviction that they were capable of witchcraft.

Watkins wrote that they were 'perhaps petrified' and 'helpless against spite, ignorance and incredulity', while Roger North commented that 'they had a great skill to convict themselves. Their description of the sucking devils with saucer-eyes was as natural that the jury could not choose but believe them'.

Though they had been condemned, there was still a possibility of reprieve, but this was quashed when Lord North wrote to the Secretary of State and urged him that the executions must go ahead.

If they did not, he warned, there was the risk of a popular uprising and of making it seem that the law was denying the existence of witches, which might give rise to the old practice of illegal witch-hunts. So even though the State had the power to save three innocent women from being put to death, political motives decided otherwise.

Once sentence of death had been passed, the women were sent back to Exeter gaol to await execution. Their deaths took place on 25 August 1682 at Heavitree just outside Exeter. As the women stood on the platform of the gallows and were berated by a clergyman for their crimes, their reason suddenly returned. They denied all the charges against them, but it was far too late.

Before they were hanged they were granted a request to sing part of the Psalm 40. Possibly they chose it for the following appropriate lines:

'For innumerable evils have compassed me about: mine iniquities have taken hold upon me, so I am not able to look, they are more then the hairs of mine head: therefore my heart faileth me.'

Susanna Edwards was the first to be hanged, followed by Mary Trembles. When Temperance Lloyd mounted the scaffold she was observed to be apparently unconcerned about her impending death. The sheriff of the county asked her whether she believed in Jesus Christ, to which Lloyd replied simply: "Yes, and I pray Jesus Christ to pardon all my sins."

A plaque commemorating the tragic deaths of the Bideford witches can be viewed today on the wall of Rougemont Castle in Exeter.

Updated by Martha Griffiths in October 2021

Everything you need to know about Sarah Beeny's move to Somerset

Win a £1000 rug from Alternative Flooring