A walk in the New Forest National Park

From the picturesque Janesmoor Pond, the walk heads through King’s Garn Gutter Inclosure, crossing Coalmeer Gutter via a ford to visit Upper Canterton and the Sir Walter Tyrell pub.

Here can be found the famous Rufus Stone, covered by a three-sided cast iron pillar in 1841. The stone is said to mark the spot where King William II, third son of William the Conqueror, was accidentally killed on 2 August 1100 by an arrow fired by Sir Walter Tyrrell. However, William II, commonly known as William Rufus because of his ruddy complexion, was an unpopular monarch and there has always been speculation as to the exact circumstances of his death.

After a quick look at the ‘stone’, the route meanders its way through woods to pass Lower Canterton, then, after a short section of road, we head back through King’s Garn Gutter Inclosure to Janesmoor Pond passing Priors Acre on the way. This is one of the earliest enclosures in the forest, dating from around 1700, and remnants of pre-inclosure pasture woodland exist adjacent to the old boundary bank and ditch, which are still clearly visible. 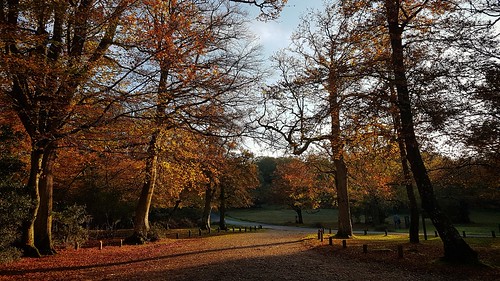 More information: Further walks exploring the New Forest are available in the recently published Walking in the New Forest written by Steve Davison (Cicerone £12.95) which is available from bookshops and online.

1) Head south from the car park across the open grass with Janesmoor Pond to the right and follow the fence on the left. Turn left along the gravel track into King’s Garn Gutter Inclosure and after 75m turn right, following a grassy ride as it descends and bends to the left. Ignore a path up to the left and keep ahead through a gate.

2) Continue straight on to a junction of four rides and turn right for 100m, crossing a stream. At the next junction follow the ride to the left to reach a gravel cycle track and turn right. Go through a large gate to an open area and turn left, heading east, and follow a path down through the open trees to reach a ford at Coalmeer Gutter.

3) Head in an easterly direction across the open grassy area dotted with trees to join a road beside the Sir Walter Tyrrell at Upper Canterton. Turn right and just after the entrance to the pub car park fork left along a grassy track, passing a house and two low vehicle barriers – shortly on the left is a picturesque thatched house, Glen Cottage.

4) Turn right along the drive to reach the Rufus Stone car park, across the road, next to an oak tree, is the Rufus Stone. From the back of the car park follow a path, roughly at right angles to the track from Glen Cottage. Head north-east down through the trees to cross a stream, the path splits close to the fence corner on the right; take the left fork to reach a hedge on the left after 300m and follow this to join a track at Greys Farm in Lower Canterton. 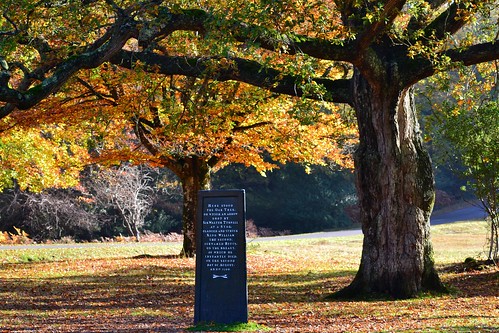 5) Keep ahead and then left at the track junction, following a signed bridleway past a house. Follow the fenced bridleway through the woods and go straight on along the surfaced lane to a T-junction. Turn right along the lane for 600m, on the way crossing a footbridge adjacent to a ford. Where the lane bends right fork left onto a hedge-lined gravel track.

6) Keep to the track as it curves left to head south, with a fence and line of trees to the left and golf course to the right. Cross King’s Garn Gutter at the ford and head diagonally right across the open grassy area towards the trees, aiming for the small gate in the fence.

7) Follow the grass ride through the trees for 250m and turn right at a four-way junction to follow a gravel track for 400m. Where the track bends left keep straight on along the grassy ride; on the left is the old earth bank and ditch marking the boundary of Priors Acre.

8) Follow the ride as it bends left to join a gravel cycle track and turn right, then right again at the next junction, down through a gate into an open area. Keep along the track for 60m and turn left up the grassy strip, or driftway, between the fenced woods, passing some wooden animal pens. At the end of the wood on the left, turn left back to the car park.

Win a festive selection of drinks from Wharfside Wines