12 of the best woodland walks in Surrey

Surrey is England’s most wooded county and the Surrey Hills boasts almost 40 per cent woodland cover. These woodlands hide a wealth of archaeological features. We pick some of the best woodland walks to explore

Bourne Wood (also known as Bourne Woods) is an area of predominantly coniferous woodland, just south of Farnham owned by the Forestry Commission. Wander through large areas of heathland and up steep hill paths and you’ll discover spectacular views over the pine forests below. The heathland is interspersed with silver birch and pine trees creating a more mature heathland habitat and the sandy soil provides a good walking surface allowing access to many of the tracks and public footpaths throughout the year.

Owned by the Woodland Trust, Marden Park near Woldingham, sits high on the rolling chalk downs of East Surrey. Its ancient semi-natural broadleaf woodland is coupled with sections of newer planting and interspersed with clearings of rare chalk grassland, making it a diverse and fascinating natural habitat. In spring, the oak, horse chestnut and the gnarled, twisted trunks of veteran beech trees are skirted by ferns, foxgloves, and a carpet of vivid bluebells. Later in the year, the huge variety of tree species brings a stunning palette of autumn hues.

The hidden woods with ancient trees and flower-sprinkled grasslands of Abinger Roughs are a must. Just off the North Downs and Pilgrims Way and above the village of Abinger Hammer, is a peaceful mixed woodland with some might oak trees, some of which are over 300 years old. In the 1970s, Charles Darwin walked on the Roughs while staying at Abinger Hall. Abinger Roughs’ shady paths are fairly flat and clearly marked, and the National Trust offers a circular trail, which is perfect for families and those new to exploring the countryside.

Chiddingfold Forset, managed by the Forestry Commission, covers a block of woods spanning 840 hectares and lies to the North-East of Chiddingfold village. A significant proportion of the forest is of national importance and designated a Special Site of Scientific Interest (SSSI). The wood contains a large proportion of Broadleaved species including significant numbers of Oak, Birch and Ash trees. Rich in wildlife the forest is home to the rare wood white butterfly, rare moth species and the Bechstein’s bat.

Banstead Woods and Chipstead Downs has a long and fascinating history. It was alluded to in the Domesday Book 1086 and has been in the ownership of Kings and Queens of England, Knights of the Realm, the founder of Barings Bank and many other interesting people over the years. Iconic characters from CS Lewis’ classic children’s tale The Lion, the Witch and the Wardrobe have been brought to life at an enchanting new Narnia themed nature trail at Banstead Woods and Chipstead Downs Nature Reserve. The figures have been carved from standing deadwood by talented chainsaw sculptor Ella from The Tree Pirates, making use of the site’s own existing natural resources. It is hoped that more sculptures will be added over the coming months as funding becomes available.

These woods are a fine mix of oak, ash and beech with areas of hornbeam and hazel coppice. It is an Ancient Woodland as it has remained continuously wooded since Saxon times. A wonderful place to get away from it all; look out for stunning displays of bluebells in spring and a variety of fungi in the autumn. There is also a beautiful woodland pond and to help you get the most out of your visit.

A Site of Special Scientific Interest (SSSI), owned by the City of London Corporation, this woodland is famous for its rare veteran pollarded oaks dating from the 17th to 18th centuries. They are of great conservation interest, so each tree has a specific care plan to prolong its life. The nearest car park to the common is Stew Ponds car park. 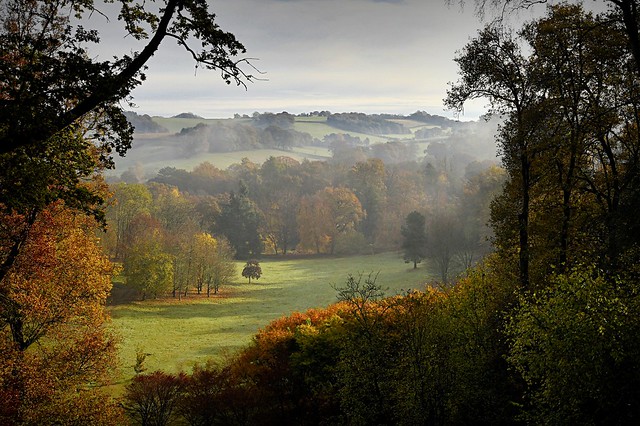 Hammonds Copse woods is home to species ranging from tawny owls, chiffchaffs, blackcaps and sparrowhawks to butterflies including the silver-washed fritillary, yellow brimstone and white admiral, as well as bluebells, wild daffodil, guelder rose, wild service tree and wood spurge. The woods have a marked trail to follow and free car parking.

In 1952, consultant dermatologist Dr Wilfrid Fox handed the National Trust a piece of the Surrey Hills that he had nurtured for 15 years – his arboretum at Hascombe, containing a magnificent and important collection of trees from all around the world. Winkworth Arboretum is open at different times throughout the year so it’s best to check the website before visiting. Parking is free.

The Hannah Peschar Sculpture Garden in Standon Lane, Ockley is a magical woodland that fires the imagination. The forest garden, created by landscape designer Anthony Paul with lakes, broadleaved plants and mature trees, provides the frame for contemporary sculptures.

Sheepleas is a 300-acre mosaic of woodlands and wildflower meadows on the chalk slopes of the North Downs. It supports a huge diversity of wildlife, from butterflies to very rare flowers and the area includes working coppices. If you’re lucky, you might spot the occasional charcoal kiln.

The best walks in Surrey

Shere woodlands is made up of three picturesque sites in the Surrey countryside; West Hangar, Combe Bottom and Netley Plantation. The North Downs Way goes through the West Hangar area where there are spectacular views across the Weald towards the Devil’s Punch Bowl and the South Downs. Parking can be found on Staple Lane, East Clandon. Dogs can visit the woodlands.