Some of the cuise ships of the south coast have been there for over a year - Credit: Roderick Eime, Flickr

After a year of calling Torbay home, the captain of a Holland America cruise ship has made an emotional farewell online to locals who made him and his crew so welcome during their unexpected stopover.

Most of us living on the South West will have spotted at least one cruise ship off the coast in the last 12 months. After all cruises and unnecessary travel was halted in the wake of the pandemic, the massive boats had to go somewhere whilst they waited for it to be safe once more.

With things starting to change globally, many of these boats are preparing to set sail and leave the bays of the South Coast. One such ship is the Eurodam who has become a staple sight off Torbay and a firm favourite with locals. In a heartfelt Facebook post yesterday, Captain Arno Jutten thanked the people of Torbay for their kindness over the months and wished them well.

The message was posted on the page Ships in Torbay and Lyme Bay which recently hit over 15 000 followers due to the fascination and warm feelings felt for the cruise ships both locally and further afield.

"Dear people of Torbay.
I am not sure if this is a relevant post for this page but I would like to thank you for all your support during the past months. It was a pleasure to be anchored in your beautiful bay. I wish the ships (all ships) good luck as they are returning to their natural element in the coming months to welcome our guests back. As for saying goodbye, We as seafarers don’t really say goodbye. Like ships, we come and go, visit new places, make new friends and meet up with old friends. We will always remember this unusual time and your support. Take care of each other and until We meet again."

Our readers have loved snapping shots of the cruise ships around Devon - Credit: Alan Holgate

Since the Eurodam first docked a year ago, the crew have become a close part of the community, even when spending most of the time isolated on their ship. During special occasions such as Remembrance Sunday and New Years Eve, locals could hear the cruise ship and the rest of the Holland America fleet sounding their horns in solidarity and celebration.

Last month, they even showed their gratitude by lighting up the side of the ship with the word 'Torbay' and two hearts. 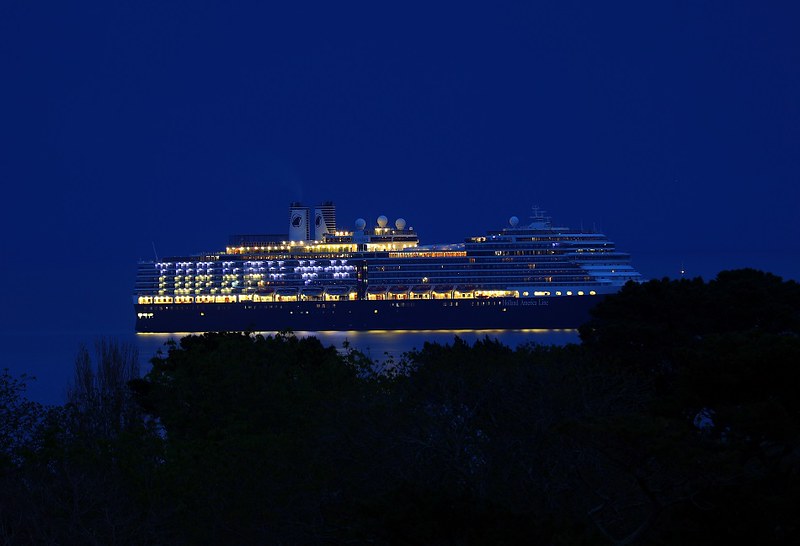 The locals were just as receptive and welcoming, organising gifts and Christmas cards over the holidays for the crew who were unable to go home and be with their families and friends.

Arno Jutten's Facebook post was met with many heartfelt replies from Torbay residents. One commenter wrote "Thank you. It has been joyful seeing you all in the bay. We will miss you all and look forward to seeing you again soon. Don’t be a stranger."

Another said: "You’ve been a wonderful anchor during our storm.”

So why have these cruise ships found a home in the South West whilst out of work? Due to the size and complex mechanics of the ships, they cannot simply be docked and left when not transporting guests. Just like a car battery, being unused for a period of time can cause faults which are extremely expensive to fix. There are also not enough spaces in ports to accommodate more than one or two of the huge ships, so many must moor off shore and be maintained by a skeleton crew. Around 120 people are required to keep a cruise ship in good condition including deck crew, engineering crew, a medical team, security, and then catering and housekeeping staff to look after the rest of the crew. By keeping staff aboard, the vessels can quickly be made ship-shape and speed off to their next destination when possible.