9 things you probably didn't know about the Isle of Wight

Looking towards Freshwater Bay from Tennyson Down - Credit: Getty Images/iStockphoto

The Isle of Wight was the sunniest place in the UK in 2020, so it is no wonder that residents of the island and holidaymakers alike fall for its charm over and over again.

Here are 9 things you may not know about the island

1) Osborne House is the former holiday home of Queen Victoria and Prince Albert. The Prince designed the property himself in the Italianate Style because the beautiful views over the Solent reminded him of the Bay of Naples. Be sure to discover the

2) The Isle of Wight has earned the nickname Dinosaur Island as it is one of the best places in Europe to find fossils. The museum Dinosaur Isle houses over 1000 fossils and offers guided geology and Fossil walks around the top locations on the island.

3) The Isle of Wight has connections to three different icons of 60's music:

4) Yarmouth Pier is the longest wooden pier in England. It was opened in 1876 and has undergone many restorations since then as the wooden piles have to be replaced periodically for safety, and a few boats have also crashed into the 186-metre structure over the years. Click here to find out more about Hampshire's most beautiful piers.

5) The Isle of Wight has been the home to many famous faces over the years, from Cowes born actor Jeremy Irons to the Ryde born Oscar-winning director of The English Patient Anthony Minghella. The island has also attracted an eclectic mix of temporary residents, including Charles Dickens, who wrote much of David Copperfield while there, '60s fashion icon and musician Jane Birkin who attended Upper Chine School in her youth and survival expert Bear Grylls, who moved to Bembridge at the age of 4 among many others.

6) Bembridge is home to the oldest working phone box in England and was designed by Sir Giles Gilbert Scott in 1921. It is a K1 model and has become a Grade II listed. 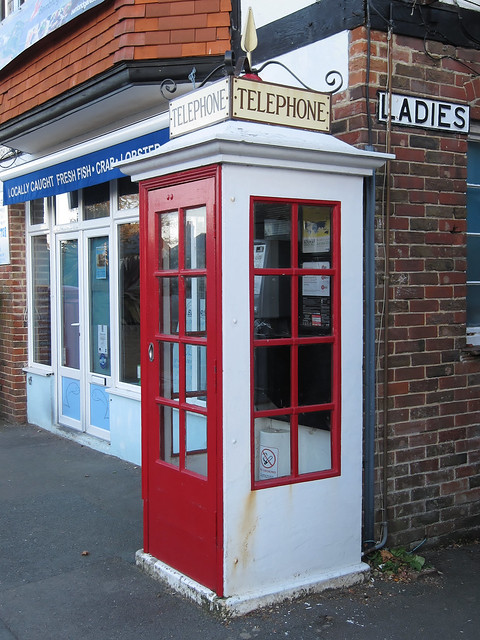 7) Charles I was imprisoned in Carisbrooke Castle for over a year before his execution in 1649. The monarch had hoped to be able to trust the island's governor, Robert Hammond thinking he could be an ally after fleeing Hampton Court on charges of treason

8) The pretty village of Mottistone gets its name from the only megalithic monument on the island, the Longstone. This stone was a moot-stone, a meeting stone of Anglo-Saxon origin where locals would gather to discuss local business and sometimes settle court cases. Now many people travel to the Longstone to celebrate the solstices and equinoxes every year.

The Longstone at Mottistone on the Isle of Wight was used by the Anglo-Saxons as a meeting place but the stone itself dates back to Neolithic times. - Credit: Mypix / Wikimedia (CC BY-SA 4.0)

9) The Isle of Wight is home to the oldest theme park in the world. Blackgang Chine was built in 1843 to entertain the rising numbers of Victorian holidaymakers who sought out the island as a holiday destination due to Queen Victoria's fondness for it.

11 beautiful buildings in Hampshire and the history behind them

7 great walks on the Isle of Wight

23 places to find the best views in Devon

16 beautiful beaches in Devon you have to visit