8 beautiful buildings in Kent and the history behind them

Hever Castle very much conforms to what we imagine a castle to look like with its moat, draw bridge and crenellations (the rectangular gaps where archers would fire arrows from in a siege). - Credit: Dmitry Djouce / Flickr (CC BY 2.0)

Kent may be the 'garden of England' but the county certainly has its fair share of beautiful buildings, each of which with various architectural styles and rich histories; here are 8 that you should visit. 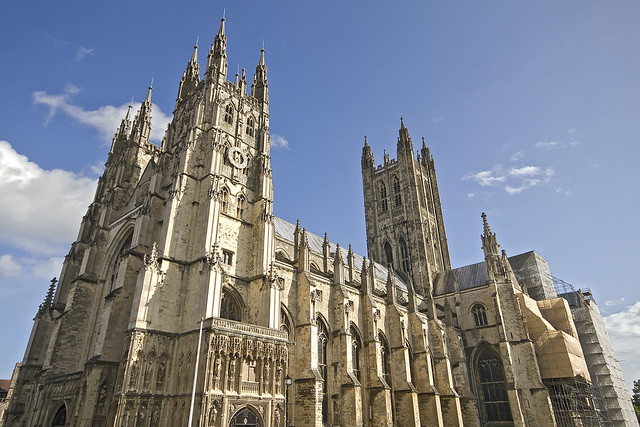 The Canterbury Cathedral that still stands today was built during the Norman era as the previous Cathedral burnt down in 1067. Inspired by the design of the Abbey of Saint-Étienne in Caen, the first Norman Archbishop Lanfranc began the building of the Cathedral in 1070 with improvements and changes taking place over the next hundred or so years and then later in the 14th and 15th centuries.

Canterbury Cathedral became an important place of pilgrimage after the Murder of Thomas Becket on Tuesday the 29th of December 1170. The Archbishop was slain by King Henry II's Knights inside the Cathedral and, as a result, was made into a martyr. The pilgrimage that many took to Canterbury Cathedral inspired Geoffrey Chaucer's Canterbury Tales, which is heralded as one of the greatest literary achievements of all time.

Hever Castle very much conforms to what we imagine a castle to look like with its moat, draw bridge and crenellations (the rectangular gaps where archers would fire arrows from in a siege). - Credit: Dmitry Djouce / Flickr (CC BY 2.0)

Hever Castle, in its initial incarnation as a traditional Medieval castle, was built in 1270. It is thought that William de Hever, a Norman who was made the Sherrif of Kent in 1272, was the first owner of the castle and, therefore, its namesake.

But perhaps, Hever Castle is most well known as the childhood home of Anne Boleyn, a woman who would go on to change the face of England profoundly through her relationship with King Henry VIII. The Boleyn's first came into ownership of Hever Castle via Geoffrey Boleyn in 1462. Geoffrey would go on to transform the castle into a manor house by building a Tudor style extension onto the existing bailey structure. When Geoffrey Boleyn passed away, his grandson Thomas Boleyn who was Anne's father, inherited the property.

The Reculver Towers and Roman Fort are an iconic part of the Herne Bay coastline and have had quite a history. Originally the site of a Roman fort, St Mary's Church was built in the 7th century using stones and tiles scavenged from the previous structure. The church became an important centre of religious activity for the Anglo-Saxons, so much so that King Eadberht II of Kent was buried at the site in Reculver in the 760s.

Later St Mary's was plagued by Viking attacks due to its proximity to the coast and the seafarer's knowledge that ecclesiastical establishments were well endowed with gold and other riches for them to pillage. However, by the 11th century, the Church was functioning optimally as a Parish Church and was mentioned in the Doomsday Book, the foremost survey of the time.

Over centuries several extensions were added to the Church until the settlement of Reculver started to experience a decline. In the 1776 text Villare Cantianum: Or, Kent Surveyed and Illustrated, Thomas Philipot described Reculver as a place "full of solitude, and languished into decay". Naturally, with the population of Reculver decreasing and the eroding coastline, St Mary's Church was seen less and less like a priority, and so it fell into disrepair.

In 1807 a storm struck the area, and a high tide eroded away at the cliffside, destroying much of the churchyard wall and encroaching alarmingly close to St Mary's itself. Plans to save the church were drawn up, but it was decided that it would instead be destroyed the following year. So in 1909, in an act that some dubbed intolerable vandalism, gunpowder was used to demolish much of the church and what remains now is the Reculver Towers and a small trace of the church layout.

Seemingly straight out of a Wes Anderson film, Charles Dickens' Swiss Chalet has a rather charming story behind it.

The chalet was gifted to Dickens by his friend Charles Fechter for Christmas in 1864, however rather than being fully formed; it arrived in 58 separate boxes. Dickens attempted to put the Chalet together himself, but the task proved to be too challenging, so he enlisted a professional to take care of it for him.

The chalet was installed a short distance from his home at Gads Hill in Rochester, and Dickens would go on to write some of his most famous novels in it, such as A Tale of Two Cities and Great Expectations. It is also known that Dickens spend part of his final day alive in the Chalet writing the unfinished novel The Mystery of Edwin Drood.

In the 1960s, the Chalet was moved to Eastgate House, where it remains now.

Half of the charm of Scotney Castle is the fact that Nature is slowly reclaiming the structure; with climbing plants meandering up the walls and flowers sprouting through cracks in the walls, the building very much looks like it belongs in a fairytale.

Three main architecture styles have been blended together over the years to make up Old Scotney Castle. The first was a fortified manor house with towers at each corner which was built by Roger de Ashburnham between 1378 and 1380. By the 16th century, there was only one of a possible four towers remaining; an Elizabethan style manor house was built to adjoin the tower. Inside the manor house remain some well-concealed Preist Holes, where Jesuit Richard Blount hid with the help of owner Thomas Darrell, for this was a time where Catholicism was outlawed and punishable by death.

In 1630 the eastern wing of the building was modified to incorporate a Palladian-style building inspired by the work of Inigo Jones; most of this part of the building was, however, dismantled in the 19th century when the Hussey family began work on the Scotney 'New' Castle and transforming the garden into a picturesque landscape that incorporated the ruins of the Old Scotney Castle into it beautifully.

Oxon Hoath is a Châteauesque-style manor house and was originally built in approximately 1372 by Sir John Culpepper a Knight of Henry V, however, it wasn't until the building was remodelled in the mid 19th century that it took on this very French architectural style. The octagonal mansard roof is perhaps the most compelling addition that was made and really sets this manor house apart from others. This feature and the chateau tower by architect and restorer Anthony Salvin was commissioned by owner Sir William Geary in 1846. Also, around this time the garden was installed by William Andrews Nesfield, its design was heavily inspired by legendary landscape artist Capability Brown's work. Now the garden is the only surviving unaltered parterre garden in the whole of England.

Beaney House of Art and Knowledge

This Tudor Revival building is situated in the heart of Canterbury and certainly has a wow factor due to its gorgeously ornate detailing. It was designed by architect A.H. Campbell in 1897. The building is named after Canterbury born surgeon and philanthropist James George Beaney who bequeathed £10,000 in his will to the city to create 'The Beaney Institute for the Education of the Working Man' which opened up in 1899. Later in 1934, the Slater wing was added to the rear of the property and was turned into an art gallery that houses several works by local artists and some paintings by Dutch masters as well. Between 2009 and 2012 the institute was closed for refurbishment.

Formally, Chatham Town Hall, the Brook Theatre was designed by architect George Edward Bond in the Renaissance style. The building features many decorative embellishments including the loggia above the entrance, the clock tower with a domed cupola and sculptures of Britannia, justice, agriculture and music.

In 1974, the town hall ceased to serve as the headquarters of the Chatham Borough Council as it was replaced by the larger newly formed Medway Borough Council that took presidency at Gun Wharf. In an attempt to cultivate art and culture in the town the grade II listed building became the Medway Arts Centre in 1987 before becoming The Brook Theatre in 1997.