Local historian Chris Horlock reveals the story of a 1950 smallpox outbreak in Brighton, plus the curse of Cowdray House and an unusual monument in Peacehaven

Late in 1950, an outbreak of smallpox struck Brighton. On 27 December, two patients at Bevendean Isolation Hospital, on the outskirts of the town, were diagnosed with smallpox. One was an RAF man, on leave, who had returned from India to Britain via Shoreham Harbour and who had felt unwell during the journey. The other was his telephonist fiancée, with whom he’d been staying. Her father, a taxi driver, also contracted the disease.

This led to 77,000 people in Brighton being vaccinated, with a further 50,000 in Hove. Many, who were children at the time, still bear the injection scar to this day. Shops were closed (and Britain was still under rationing from World War II at this time), mass meetings cancelled, schoolchildren sent home and performers at the Theatre Royal were put under quarantine for a period.

There were some extraordinary aspects to this outbreak. Those in self isolation had large black crosses painted on their doors - rather like during the Great Plague of the 1666. Food supplies and other essentials were left on doorsteps, but later, when the outbreak was over, a bill came through the letter box demanding payment for everything received! 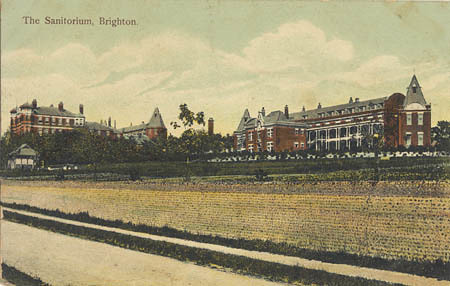 Also, the bedding used by the RAF man was sent to a local laundry before his smallpox had been diagnosed. Realising this could result in widespread contamination, all its customers were speedily traced, nearly 2,000 of them (no computer system then, it was done from paper records and billing), and all advised to inoculate.

There were 29 confirmed cases, with ten deaths. Most were at the hospital, where three nurses died, plus two domestics and a gardener. The ‘all clear’ was declared in early February 1951 - somehow, the RAF man and his fiancée survived, but her father was one of the victims.

Bevendean Hospital opened in 1881, but was wound down as infectious diseases were treated in Brighton’s conventional hospitals. It admitted its last patients in 1990 before being demolished and replaced by a large housing estate and the Sussex Beacon centre. The impressive gate posts still stand.

The Meridian Obelisk at Peacehaven was unveiled in August 1936, on the cliffs at the bottom of Horsham Avenue. It was originally intended to celebrate the Silver Jubilee of King George V, but instead was dedicated to his memory, following his death in 1935.

This is an imaginary line circling the world running from pole to pole, entering northern Britain at Withernsea, Yorkshire, cutting down through Greenwich’s Royal Observatory, then running southwards to Lewes, on to Peacehaven, out across the Channel, to France, Spain, then on a journey round the entire planet, covering land, ice, seas and oceans.

And its significance? From this line, all global distances are measured and from it, all the clocks of the world set their time.

A plaque on the structure gives distances from Peacehaven to worldwide locations; London is a mere 48 miles away, Canberra, Australia, 10,564 miles, Ottawa, Canada, 3,359 miles and Wellington, New Zealand, a whopping 11,735 miles away! 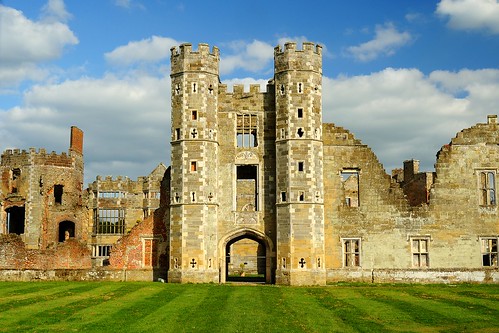 The ruinous state of Cowdray House at Midhurst is the result, according to tradition, of a double curse. There are variations on the story, but the ‘best fit’ version goes as follows.

When a neighbouring monastery passed into the hands of the Sir Anthony Browne, owner of Cowdray, following the Reformation, he had all the monks instantly expelled.

One of them is said to have cursed the family (obviously forgetting his Christian ethics) saying: “By fire and water thy line shall come to an end and it shall perish out of this land.” Or words to that effect. 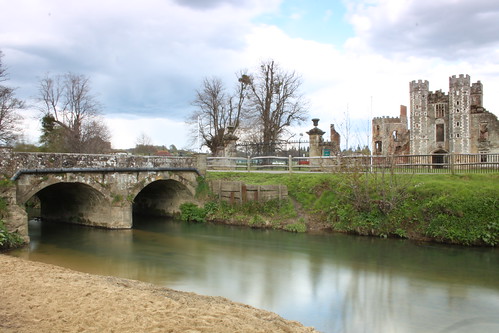 Browne’s successor, his son of the same name, was created 1st Viscount Montague in 1548. Fast forward to 1793 and the house is engulfed by fire and seriously damaged when careless workmen started a blaze in the north wing. Some irreplaceable paintings were lost, including several by Holbein.

A few months later, while the young 8th Viscount Montague was in Germany, he decided to negotiate the Schaffenhausen Falls on the Rhine in Germany. His boat was too small and he capsized at the second cataract and was never seen again.

News of the fire back home hadn’t reached him. He was succeeded by the 9th Viscount, who died childless, so the family line died out. The old curse was fulfilled, but had taken over 200 years to take effect.

READ MORE: 3 more tales of Sussex past or pick up a copy of Chris Horlock’s book, Illustrated Tales of Sussex, which is full of quirky tales of the county

13 beautiful riverside pubs to visit in the Cotswolds

10 of the prettiest Villages in Dorset to visit