An introduction to Bawdsey and the story of Watson Watt's radar - Credit: Archant

Lindsay Want meets the team at Bawdsey Radar to discover how Suffolk’s newest restoration, set in a secret coastal corner, is giving off all the right signals to be a top attraction in 2018

Down between the Deben and the deep North Sea, everything under the bluest Suffolk sky is a bit hush-hush. Just a faint whispering across the outstretched reedbeds. The gentle brushing of heady Scots pines standing sentinel on unseen clifftops.

A somehow super-natural silence, interrupted only by the crackly calls of tiny warblers and occasional sharp spike of a cry from a marsh harrier circling overhead. Drive here from Woodbridge past Shottisham, Ramsholt, Alderton, and across the miles, a slight nervousness mounts – the sort encountered by those early sailors who knew little of the world and lived in fear of falling off the edge.

Ferry it across from Felixstowe, and you just can’t help wondering where on earth you have landed. Bawdsey, its manor and estate are, by all accounts, in the back of Suffolk’s beyond, and therein lies a tale. 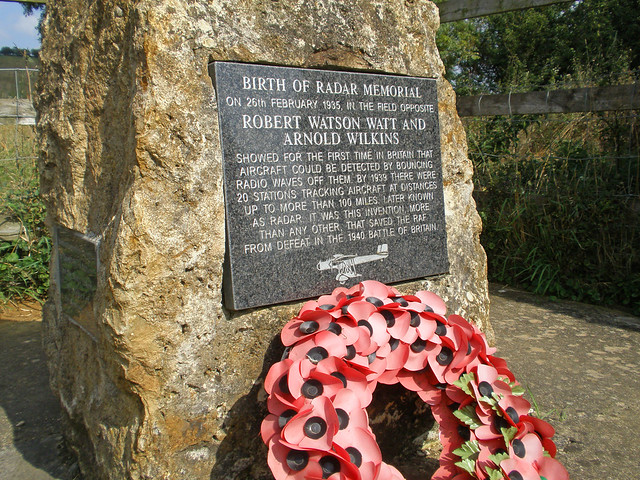 By a pair of pudding gates south of the village’s mock Tudor cottages, it’s eyes left to pinkish block-buildings and a pill box on the hillside before the criss-cross steel structure of a Marine Coastguard Agency mast draws attention skywards.

Stretching up 60 metres to survey the final flat lands of the estuary, it gives nothing away about towering predecessors. But what it does do is deliver a sense of scale and absolute awe when you finally discover how, in war time, nearby wooden receiver towers had been taller still, and four steel transmitter towers formerly on the spot had been all but twice as high. 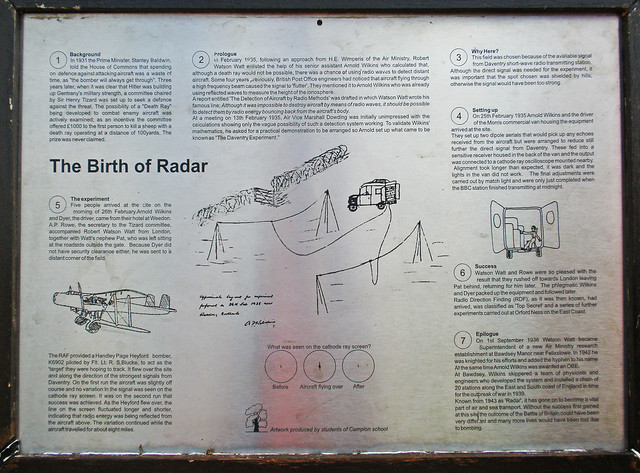 Pinnacles of achievement? Surely such lofty defences were once commonplace, lining England’s east coast shores? Ah, but Bawdsey is so much more than just another blip on that wartime landscape. At the very heart of scientific breakthrough and innovation, this isolated and secretive Suffolk spot was, and always will be, a totally unique place and one of world importance. Meet the unequivocal home of radar.

“It was when the last transmitter tower came crashing down that alarm bells started ringing,” explains Bawdsey Radar trustee Miriam Stead from the warmth of the wonderfully restored bunker which burrows into the cliff behind the modern-day mast. “It was too costly to repair and there was understandable consternation that other surviving structures like this Grade II* listed transmitter block might eventually end up the same way.

“Bawdsey was first in the field in so many areas of air defence, and the first operational radar station ever built. Women held front line roles for the first time here in this very transmitter block, as radar operators. The whole site is one of a kind and of global importance, but its story was silent.“ 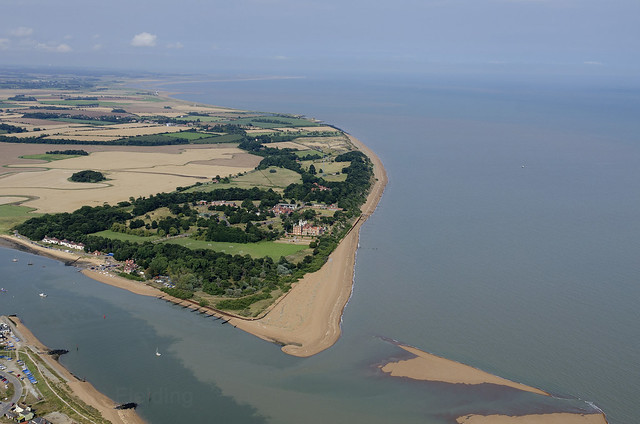 She pauses in timely reverence, going on to tell how things went from a public meeting to a small group negotiating access for an open weekend at the transmitter block in 2003, how it attracted over 900 visitors out of nowhere, many with local connections and stories to share. Yet the fragility of things was all too clear – personal wartime reminiscences about life at Bawdsey remained undocumented and would not be on lips forever.

What’s more, the irreplaceable building was in slow decay and on Historic England’s At Risk register. To raise the cash to safeguard its future and save and share the fascinating details of its world-class story would need miracles.

Getting Bawdsey on the nation’s radar

Or at least a shout-out from the BBC. When Ptolemy Dean and Marianne Suhr from Restoration reviewed Bawdsey’s transmitter block in their hard hats, the nation’s pride responded and voted it into fourth place in the 2004 show’s final. Alas, not enough to unlock floodgates of cash, but people came in flocks to sample this Suffolk curiosity.

“It was just an empty shell here then,” recalls Miriam. “The building was damp and there were just a few dedicated souls, volunteers led by Mary Wain whose parents had met and married at RAF Bawdsey, as it had been known. There was nothing here, but people came.“

Slowly the volunteers pieced together display boards. A work-party of Department of Defence graduates created more and managed to get the ancient loos working. Meanwhile the Heritage Lottery Fund (HLF) supported an oral history project, Shout & Whisper, to enable the collection of precious fading memories, plus a community play to start to share them.

Under the auspices of the Bawdsey Radar Trust, Bawdsey’s story was slowly finding its voice, but the 1938 concrete hideaway continued to crumble.

Amid falling masonry, the volunteer team’s scary HLF bid achieved an initial grant to scope the repair-and-share project fully. With £400,000 needing to be raised, things still seemed out of reach until Historic England came up with a godsend, and Garfield Weston and other funding bodies showed their support.

January 2016 saw the green light for the £1.8m project and 18 months later, around the 80th anniversary of the site going live as RAF Bawdsey, the carefully and creatively restored transmitter block was opening its doors to visitors. And the rest, as they say, is history.

Put your own finger on the pulse

Ah, but what a history, now so wonderfully brought alive and so definitely brought home. From the moment you tread the concrete corridor towards the transmitter block entrance, the planes are there above you and the tension building with every step. Inside, touching personal stories reach out through touch-screen technologies.

The life, work and outstanding legacies of radar inventor, Robert Watson-Watt, and his ground-breaking scientists stack up along multi-media timelines with gentle – if at times necessarily technical – explanations clearly revealing the challenges, aims and experiences from the early 1930s, through World War II and radar’s great triumph in the Battle of Britain to the very applications of the discovery today.

Here you can see meteor detection in action, get a handle like an air-traffic controller on real life planes flying through our Suffolk skies, identify them and find out where they are heading. And there’s even a chance to go back to the future amidst the hubbub of a wartime operations room, to test your skill and co-ordination as a radar operator, following the reflected pulses and tracking down planes at the original-style controls of a ‘goniometer’.

It’s a tricky challenge, but a fascinating hands-on history experience like no other. “I guess it’s a bit like patting your head and rubbing your tummy, “excuses ‘techy’ trustee and happy-to-help volunteer David Heath.

Tales of Stuffy, Skip and the Fruit Machine

But no matter how modern the method selected for painting the picture, the reinforced-concrete walls of the past are soberingly ever-present – carefully preserved, yet untouched even, in places. In the Telephone Room, revealed as a crucial part of Air Marshal ‘Stuffy’ Dowding’s nifty wartime communications system, the chamber dimensions stencilled in black on the walls are a haunting flash-back to Cold War days, when it was used for biological and chemical attack training and flooded with CS gas.

Opposite a dark, imposing wall full of mast light fuse boxes, comes news in full technicolour of Arnold ‘Skip’ Wilkins, and how his work to disprove the government’s whacky theory of a Flash Gordon-style, shoot-em-down death ray shed more light on Watson Watt’s bright idea of radio detection and ranging.

The red detonator button that would destroy radio equipment in the event of a plane having to be abandoned - Credit: Archant

Under sooty-black ceilings, by the air filtration plant and air-lock door, there are memories shared of lads cooking sausages on high voltage power cables and lady radar operators who couldn’t get any shut-eye on the corridor camp-beds.

Well, it wasn’t just the snoring. Fancy sleeping in a room with a man you’re not married to! Then, in the Ops room, there are loving explanations about the ‘aircraft height calculating, electro-mechanical analogue computer’, simply known as the Fruit Machine, and tales of the day when the terrifying emergency signal eventually came on the field telephone, only to announce the arrival of the tea truck.

It was all here, the relentless tension of a secret world confined by concrete, matched by unquestioning spirit and real humour. And it still is. You can feel it.

Careful how you approach the Transmitter Block . . . - Credit: Archant

Simply out of the ordinary

“It all really illustrates how extraordinary things can happen in an ordinary place and to ordinary people,“ declares Robyn Llewelyn, head of Heritage Lottery Fund, East of England, transfixed by the stories on her first visit to the new-look Bawdsey transmitter block, now firmly off the At Risk register.

“When she was a ten-year-old lass,” she muses, pointing to the picture of Miss ‘Ginger’ Girdlestone, the till girl in the local butchers who went on to be a dab hand at the goniometer, “did she even think that she’d be a radar operator? It’s like her colleague, Hilda Pearson, saying how their uniform came with trousers, when most of them hadn’t worn them before.

“Hearing about these very everyday domestic experiences, it makes you think how much lives of women have changed over the years. For me, it’s what makes this place so compelling.“

Everyday, yet out of this world. Tucked away, yet out in the open. When it comes to sharing a Suffolk secret with friends and family this year, Bawdsey should definitely be on the radar.

To find out more about Bawdsey Radar Station visit their website.

First in the field and home to thousands

Over its history (1937-1991) Bawdsey saw thousands of people pass through, as personnel were trained to staff the Chain Home network of radar stations, located around the UK coast, to provide an early warning system for attacks from the air. Bawdsey’s firsts include:

Young visitors will love donning a white coat and parading around with a clipboard on ‘The Boffin Trail’ to find out more about Bawdsey’s stories and scientific firsts. There’s even a discovery station for the little ones – and who can resist pressing the red detonator buttons?

Stand by the Deben at Felixstowe Ferry and it’s the red and white towers of Victorian Bawdsey Manor which steal the show. Stockbroker Sir Cuthbert Quilter sold his home to the government in 1936 to become Bawdsey Research Station. Women personnel got to live in the house, while the men were put up in huts on the estate.

Could volunteering be on your radar for 2018? If so, then Lynette Burgess, Bawdsey Radar’s visitor services and outreach manager would love to hear from you. “We’ve only a team of 15 volunteers at present and, opening two to three days a week throughout the season, we’d really welcome more helping hands. Perhaps you could be a guide, spare a bit of time to help clean display cabinets or use a computer to help with research or updating our records? There’s no need for prior knowledge of Bawdsey Radar, but if you do know about the site, we’d be really interested in hearing about your experiences too.” Find out more and register your interest at www.bawdseyradar.org.uk or call Lynette on 07821 162879.

When? Open regularly from Easter to October (Suns/ Bank hols/ plus other days) from 11am - 4pm. See website for dates and details.