Steve Davison heads to Buriton, just to the south of Petersfield, for a rollercoaster walk meeting up with four long-distance routes.

Our walk this month takes us on a journey through the wooded hills of East Hampshire – which lie within the bounds of the South Downs National Park – following parts of four long-distance paths. First off, we follow part of the South Downs Way and Shipwrights Way through the Queen Elizabeth Country Park, which forms a large expanse of woodland and downland, interlaced with many walking routes.

The 100-mile long South Downs Way – one of the country’s National Trails – meanders its way through the rolling chalk landscape from Winchester in the west to Eastbourne in the east. Whereas the 50-mile long Shipwrights Way weaves its way through East Hampshire from Alice Holt Forest to Portsmouth’s historic dockyard, oak grown in the forest was used for building ships during the Tudor period. There are twenty stone sculptures designed to show the history or wildlife of each place along the route, and our walk passes one of a Hampshire Down sheep, so keep your eyes peeled, or you might miss it. 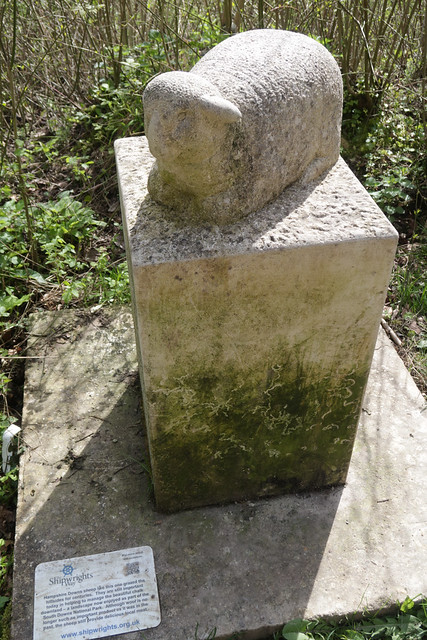 The walk then follows the Staunton Way, named after Sir George Staunton, an early 19th century Portsmouth MP, before heading north through the trees of Head Down. Here we rejoin the South Downs Way and soon pass Coulters Dean Nature Reserve, which is home to eleven species of orchid. We then head down the curiously named Milky Way (track) to arrive at the picturesque village of Buriton. Overlooking the duck pond is the Church of St Mary the Virgin, which dates back to Norman times; slightly off route, along the High Street, is the Five Bells pub.

The final leg of the walk follows part of the 31-mile Hangers Way; the trail is named after the steep-sided wooded hills, known as “The Hangers”, that the route meanders through. On the way back, keep a lookout for an old metal cart on the left. Chalk used to be quarried at the old chalk pits before being transported in horse-drawn carts along a narrow-gauge railway. The mined chalk was heated in kilns to produce lime; however, nowadays, the old Chalk Pits forms a local nature reserve.

Terrain: ups and downs, tracks and paths, some gates, no stiles, short sections of road

3) Bear left along the lane as it curves right to pass Wyck Barn and at the left-hand bend, turn right along a track passing the vehicle barrier to enter Head Down wood (Forestry Commission sign). Follow the track uphill to a junction and turn left up the grassy track for slightly under three-quarters of a mile. At the top of the climb, shortly after the route has levelled out, keep a lookout for a grassy track on the right and head down this. Pass a vehicle barrier and turn sharp right along the lane.

4) Head down past a house and continue along the track, now following the South Downs Way again. Keep to the undulating track, later heading under power lines and then passing Coulters Dean Farm. From here, the way becomes surfaced and soon curves left; on the right is Coulters Dean Nature Reserve. Keep to the lane and at the sharp right bend, turn left along the track (byway) known as the ‘Milky Way’. Pass under the power lines again and follow the byway steeply downhill. On leaving the trees, turn left through a kissing gate and follow the enclosed path westwards towards Buriton.

5) At the path junction, turn right through a kissing gate and follow the track northwards past the pond, with the church on the right. Turn left along the High Street for 50m and then left along South Lane following the Hangers Way, all the time keeping the pond on the left; some 200m further along the High Street is the Five Bells pub. Continue past some houses and then go under the railway Keep ahead up through trees; on the way, there is an old rail cart on the left and an access path to Chalk Pit local nature reserve. We continue uphill to pass a small pond and arrive at a lane. Go straight across the junction back to the car park.