11 beautiful buildings in Hampshire and the history behind them

Highclere Castle is known to most as Downton Abbey, but did you know that the architect who designed it also designed one of the most iconic buildings in the whole world? - Credit: Zen Whisk / Flickr

Hampshire is full of some of the country's most beautiful and fascinating buildings, with various architectural styles and rich histories; here are 11 that you should visit.

Now in ruin, the Titchfield Abbey was a medieval-era structure that was first built in the 13th century to serve as the home of a collective of Premonstratensian canons, an order of frugal priests. However, in 1537, during the dissolution of the monasteries, the Abbey was closed by Henry VIII and gifted to Thomas Wriothesley as a reward for his assistance in the suppression.

Wriothesley soon converted the property into a mansion with the help of Thomas Bartewe, a master mason favoured by the King. They added perhaps the most striking feature of the building that lasts to this day, the gatehouse. It was built across the nave of the church and transformed the property from its more humble beginnings to a mansion fit for an Earl.

After passing down to Henry Wriothesley, a patron of William Shakespeare, the property was later abandoned in 1781 and fell into disrepair. In the 20th century, after being purchased by the government, the Abbey ruins were made into a Scheduled Ancient Monument and put under the care of English Heritage and is now open daily to the public.

Designed by local firm HGP Architects and engineering consultants Scott Wilson, the Spinnaker Tower was made to reflect Portsmouth's long marine history by taking the name and shape of a Spinnaker sail.

The ultra-modern tower was commissioned as part of a redevelopment of Portsmouth Harbour in the '90s and was originally conceived as a Tower to commemorate the Millennium. However, this became impossible due to funding difficulties and other political and contractual issues.

The tower's construction finally began in 2001 and lasted until 2005, costing around £35.6 million. From 2015-2020 the Tower was renamed Emirates Spinnaker Tower, as it was sponsored by the Dubai-based airline Emirates; during this time, part of the tower was also painted blue. After the sponsorship ended, the original name and colour of the Tower were reinstated.

Perhaps the most iconic of buildings in the whole of Hampshire, Winchester Cathedral is something of a patchwork of Architecture styles as it was first established in 1079 and subsequently added to and transformed by successive bishops for the next 500 years.

Anglo-norman and gothic architectural styles blended remarkably well to create the stunning visual textures of English history that is now revered as one of the countries most significant cathedrals. Click here to find out more fascinating facts about the Cathedral and Winchester City.

Downton Abbey to most, Highclere Castle is an outstanding example of Jacobean revival architecture. The earliest record of the estate dates back to Anglo-Saxon times in AD 749; later in the 14th century, Bishop William of Wykeham built a medieval palace and gardens on the grounds.

The property was then rebuilt in 1679 but would undergo further changes still. Including legendary landscape architect Capability Brown's redesigning of the garden to create a more natural and unplanned appearance and architect Sir Charles Barry's 19th-century additions. Barry was the mastermind behind the Houses of Parliament, and the architectural style of Highclere Castle has a clear similarity.

A post shared by The Vyne - National Trust (@thevyne_nt)

Originally a cluster of medieval buildings, The Vyne was transformed by William Sandys, Lord Chamberlain to Henry VIII, into a Tudor palace between 1500 and 1520. The property at one point extended all the way to the lake on the grounds; however, the properties 17th-century owner Chaloner Chute, a Speaker of the House of Commons, decided to reduce the extensive house and added a distinctive portico onto the property. 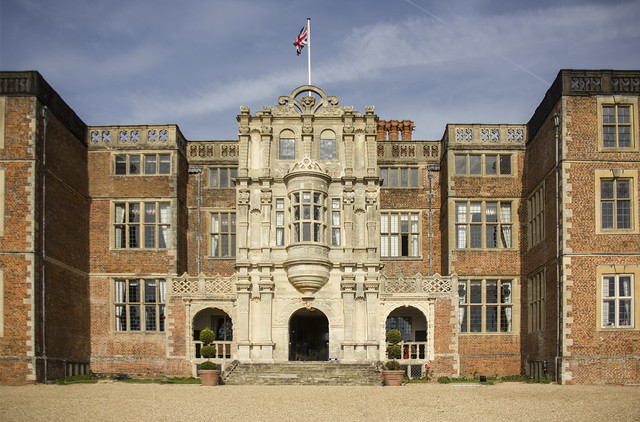 Heralded as one of England's greatest examples of a Jacobean prodigy house, this mansion was built by diplomat Edward la Zouche, 11th Baron Zouche. The exterior has pronounced Italian renaissance influences, such as the Loggia (the central three arches) seen in the midsection of the properties south entrance. In his county by county guide, The Buildings of England series, architecture historian Nikolaus Pevsner wrote that the south entrance to Bramshill House is "among the most fanciful pieces of Jacobean design in England".

According to legends, Bramshill House is one of the most haunted houses in England. People have, over many years, reported a variety of different sightings, including a woman dressed in the style of Queen Anne accompanied by a Knight to a man in 1920's tennis gear. 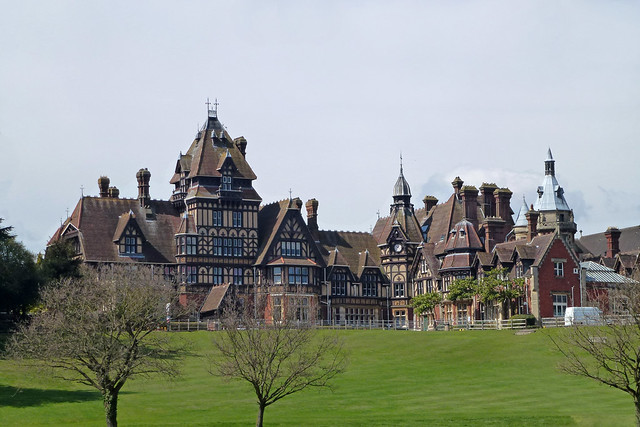 Farnborough Hill is now and has been home to an independent roman catholic girls school since 19217 after the properties owner Empress Eugénie, widow of Emperor Napoleon III of France, passed away.

The striking building was commissioned by Publisher Thomas Longman, with construction beginning in 1860. The architect of the project was Henry Edward Kendall Jr., a specialist in grand country homes and lunatic asylums, an odd pairing if ever there was one. The building quite clearly takes influences from 16th-century Elizabethan and Neo-gothic architecture styles, which makes it quite an intriguing sight to behold. 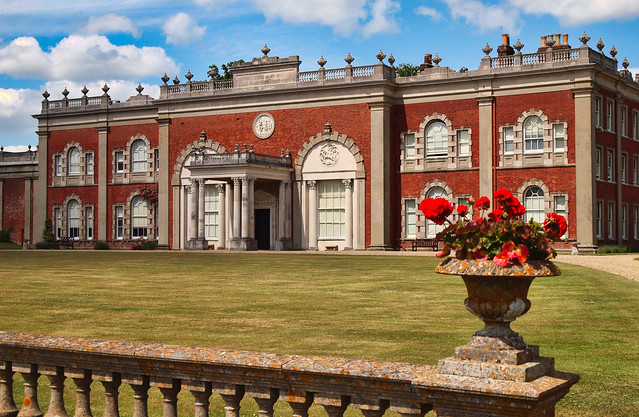 This distinctive red brick house was designed by George Dance the Younger and built in 1780 for Thomas Dummer and his wife. The properties grandness is magnified by the decorative elements of the design, including the porte-cochère entrance, large Venetian windows and the tympanums that stand above. Other decorative features were added later by Thomas Chamberlayne in the 1830s. The property now remains as the residency of the Chamberlayne family. 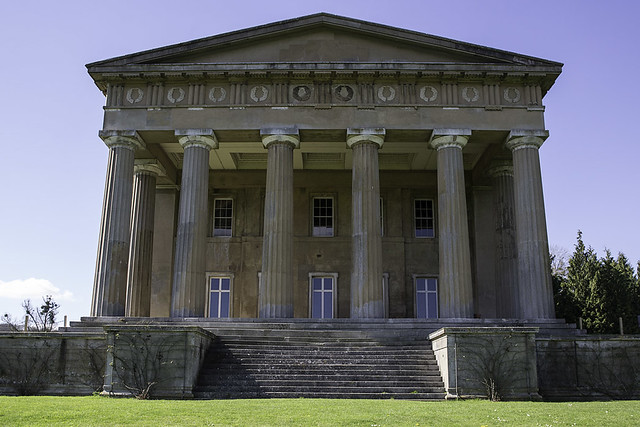 An outstanding example of the Greek Revival style, The Grange, was, in fact, once a Palladian mansion until owner Henry Drummond commissioned architect William Wilkins to transform the house into a neoclassical Ancient Greek temple because antiquated architecture was becoming popular again. The large Doric portico gives the building its distinctive look, but Drummond himself was unimpressed with the transformation, so he sold the house to Alexander Baring who made his own additions to the property.

The house passed to Charles Wallach in 1934 and then back to the Baring family in 1963 after his death. However, the house was in quite a substantial state of disrepair, and John Baring demolished some of the property, intending to destroy the rest until he was stopped by the government. The Grange now hosts an Opera festival in the summer and can be hired for events. 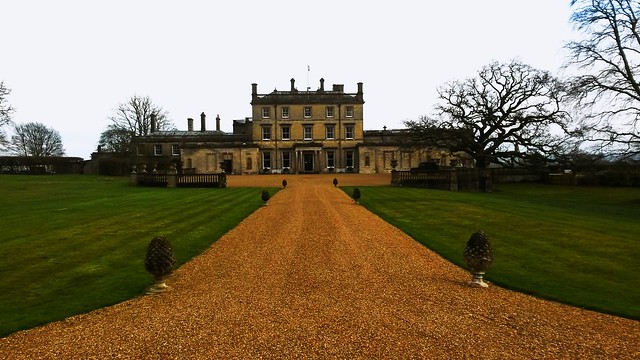 The gorgeous Georgian grade II listed property designed by architect Samuel Wyatt between 1792–1795. The property remains private and is not open to the public, yet it can be hired for events such as weddings. The house has also featured in several television productions, including the 1983 adaptation of Jane Austen's Mansfield Park and, more recently, in Netflix hits Bridgeton and The Crown. 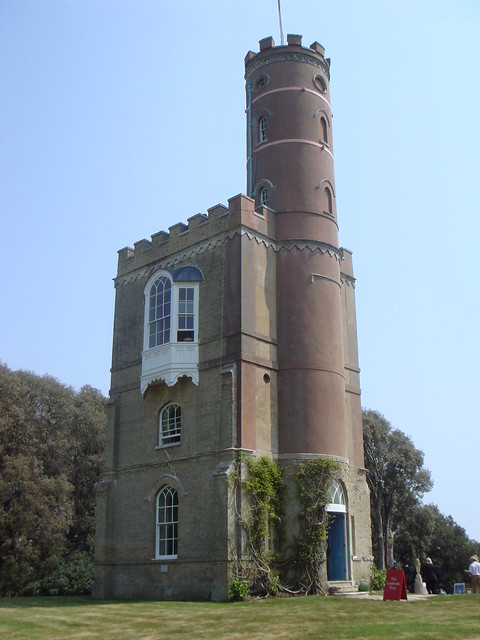 Luttrell's Tower is an 18th-century folly designed by architect Thomas Sandby, a founding member of the Royal Academy and built in 1780. The structure was built for Temple Simon Luttrell, a member of parliament who was rumoured to be involved in smuggling operations. Though no evidence of his involvement can be resolutely confirmed, the fact that the Tower has a commanding view of the area, including inland and the coast and a tunnel that runs from the beach to the tower only adds to these suspicions.

Later, in 1912 Italian radio communications pioneer Guglielmo Giovanni Maria Marconi used the tower in his wireless transmission experiments, and during the second world war, the tower was used by the military. Now the tower can be rented as a holiday home.

Where to watch the Perseids meteor shower in East Anglia

The incredible Cornish stone structures with an exceptional history

Heatwave reveals ancient Yorkshire bridge, not seen since the 1950s