Whatever the season, Hampshire’s diverse selection of beaches are some of our county’s most attractive places to visit. Excluding some of the busier town beaches, here is our pick of 10 great spots on the mainland and the Isle of Wight

Forming part of Lepe Country Park, this stony beach has views directly over to Egypt Point on the Isle of Wight. The park is ideal for a day out with the family with its various walking routes taking you through stunning woodland and coastal environments.

The recommended spot for a swim is a little east of the car park and in the same direction you will find a memorial to those who took part in D-Day. If you’re looking to stay in the area Lepe Beach Campsite is a few minutes inland on Lepe Road.

Food & drink nearby: The Lookout cafe is right in the heart of the country park or you could head around the coast to the Jolly Sailor pub at Ashlett Creek. 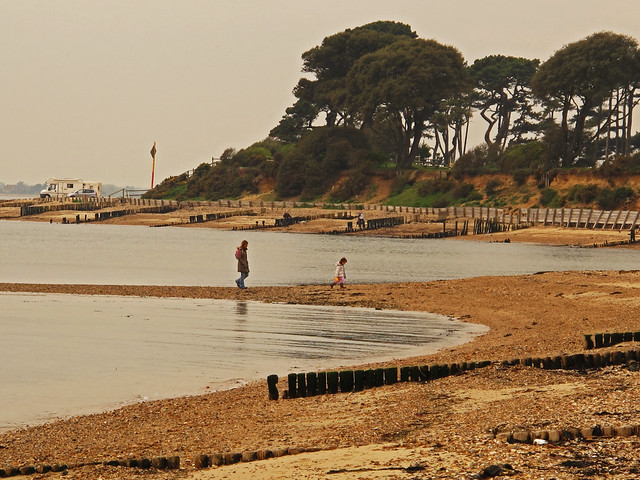 Just south of Fareham you’ll find Hill Head - a pretty village perhaps best known for its role in D-Day preparations - which has a lovely shingle beach from where you’ll often see windsurfers, kitesurfers and boats out on the Solent.

To the rear of Hill Head Harbour is Titchfield Haven National Nature Reserve, a beautiful collection of marshes, meadows and wetland areas that’s home to a wide range of birds. After a day out on the coast, the reserve provides a nice countryside contrast.

Food & drink nearby: The Osborne View pub has a great beer garden right on the water or get one of the area’s best chippies from Stubbington Fish & Chips. There are plenty more options in Lee-on-Solent including The Tea Party on the High Street. 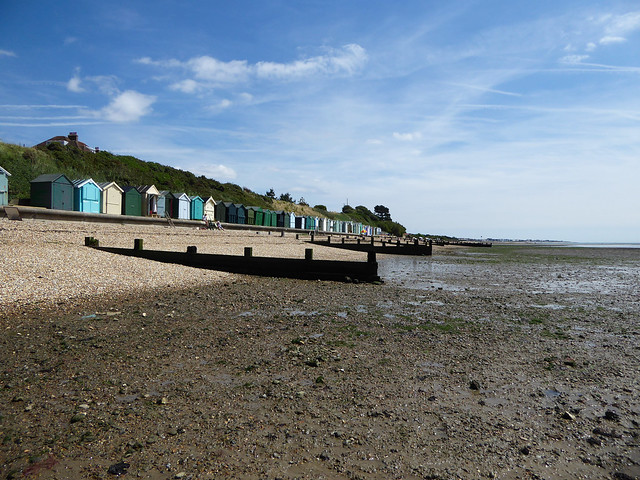 Renowned as the area of Portsmouth that’s most popular with locals, Southsea has a thriving independent food, drink and shopping scene that could be explored in the evening after a day spent on the pebble beach.

While the beach can certainly get busy at times, it’s large enough that you’ll always find a secluded spot away from the crowds. At the rear of the beach there are numerous spots you could visit including Southsea Castle, Southsea Common, Southsea Rock Gardens, Lumps Fort, the canoe lake and much more.

Food & drink nearby: Restaurant 27 is considered one of Portsmouth’s best places to eat while Gyroland specialises in Greek street food. Merchant House is a good spot for a pint or two. 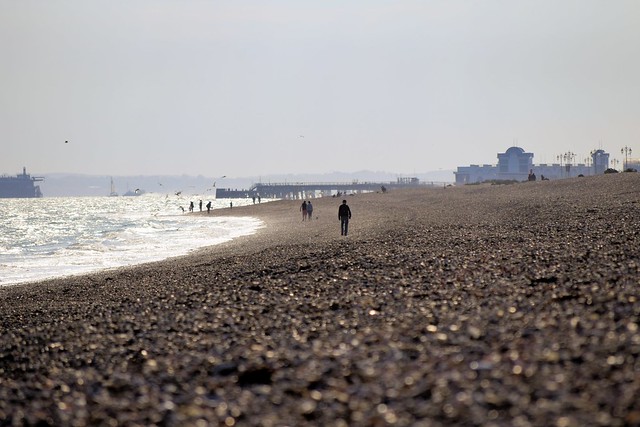 Set just around the coast from Portsmouth and looking over to West Wittering in Sussex, Hayling Island has a number of different beaches to choose from, each offering something a little different to the next.

Take your pick of the West Beach - the most popular beach on the island - Gunner Point, Chichester Avenue, Beachlands - where you’ll find a selection of amusements and arcades - Bound Lane, Eastoke Corner, The Promenade and Sandy Point.

Food & drink nearby: The Bay of Bengal is one of the top curries you’ll get in the area while the Salt Shack Cafe has brilliant views overlooking Chichester Harbour. At the other end of the island to the Salt Shack is the Ferryboat Inn which also has stretching views over the surrounding waters.

A few hours on Calshot Beach followed by a visit to Calshot Castle - an artillery fort built by Henry VIII - would be a lovely way to spend a family day out on this immaculate stretch of Hampshire’s coast.

The castle is on the end of Calshot Spit, a thin stretch of land jutting out into Southampton Water that is surrounded by water on either side, creating an environment that makes the area incredibly popular with photographers seeking to capture such an unusual part of the county.

Food & drink nearby: You’ll need to head away from Calshot for a wider choice of eateries and Hythe has a number of waterside spots for you to try including Seashells Lounge Bar & Restaurant, Boathouse Hotel & Restaurant and The Lord Nelson pub. 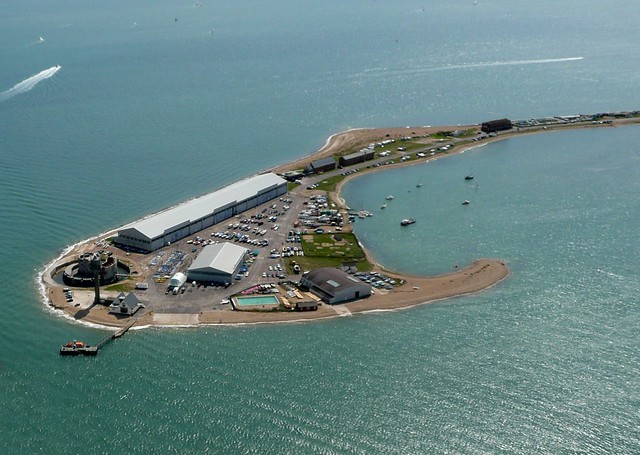 You’ll have a couple of beach options for your time in and around this traditional coastal village close to Dorset and the Isle of Wight. First and nearest to the village itself you can drop onto the shingle below the cliffs that make for a great elevated walk towards Barton-on-Sea.

Alternatively, you could set up on the breathtaking spit that leads out to Hurst Castle and has Keyhaven Marshes at its back. On one side you’ll look out to where The Solent meets the English Channel and on the other you’ll admire numerous boats as they navigate their way through sections of marshland.

Food & drink nearby: The Beach House pub has a garden leading right down to the shingle or you could nip onto the village’s High Street for fine seafood dining at Verveine. The Smugglers Inn is a nice family-friendly spot where you’ll get a traditional Sunday roast. 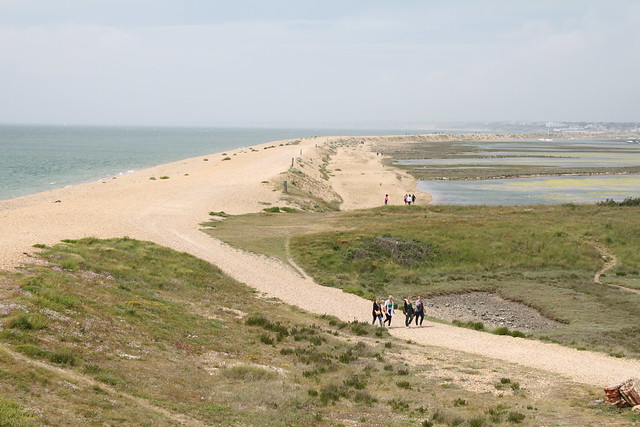 As mentioned in the previous entry it is possible to take a clifftop walk all the way from Milford to Barton so we would recommend working in a change of beach scenery to your trip to this part of the county.

Similarly to Milford, the beach lies at the foot of cliffs while the village looks on from above. Slightly inland from the cliff edge is Barton-on-Sea Golf Club, quite possibly the most picturesque place to play golf in Hampshire.

Food & drink nearby: Pebble Beach and Beachcomber are right on the village’s clifftops or head into town to Ashley’s for a top portion of fish and chips. 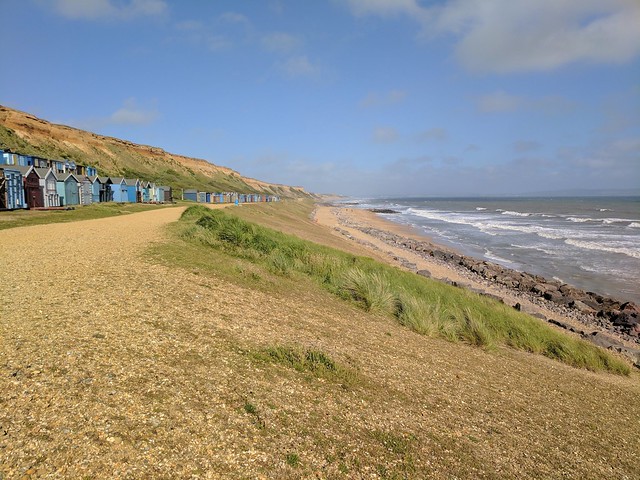 Some of the region’s best walks:

The best Isle of Wight walks

For our last few picks we’ll be making the short journey away from Hampshire’s mainland to the stunning Isle of Wight starting with Ryde, the point on the island closest to Portsmouth. For a unique journey to the seaside town we’d recommend taking a trip on the iconic hovercraft from Southsea.

Head away from Ryde Pier towards Puckpool and you’ll find expanses of soft sand where there’s plenty of room for a variety of beach-based games. Keep going in this direction and you’ll also come to Appley Beach backed by Appley Tower, a Gothic folly right near the sand that gives the area an incredibly distinctive look.

Food & drink nearby: No64 is a popular cafe on Ryde’s George Street while the Chocolate Apothecary on the Esplanade will satisfy your sweet tooth. Make your way inland to Wights on the High Street if you fancy fish and chips. 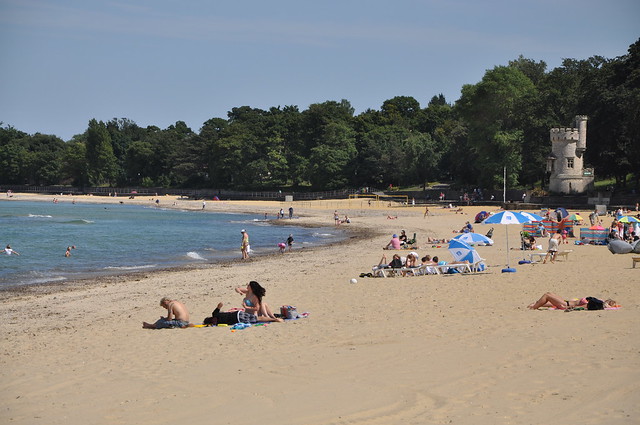 After your visit to Shanklin Chine - a breathtaking wooded gorge that’s a must-visit if you’re spending time on the Isle of Wight - make the short walk down to Shanklin Beach, a classic British resort location backed by beach huts and cliffs at one end.

At the other end of the beach you’ll find many of the things that make it such a typically British seaside spot including crazy golf, amusements, souvenir shops and many places to get food or a quick drink.

Food & drink nearby: As previously mentioned there are lots of places to try just metres away from the beach including the Fisherman’s Cottage, The Steamer and South East Beach Cafe. Each location will offer differing views of this stunning part of the coast. 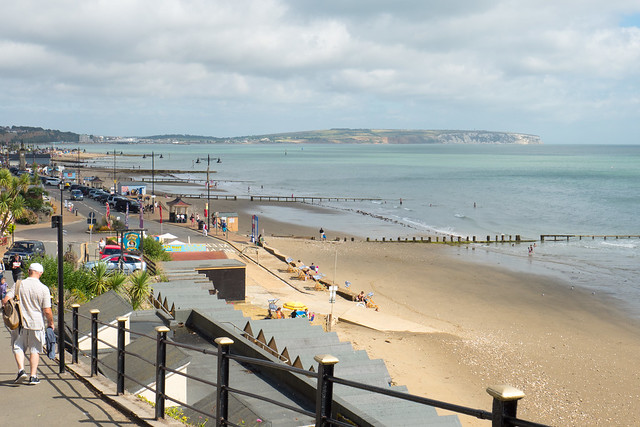 Protected and managed by the National Trust, Compton Bay and the surrounding countryside has a fascinating heritage long predating mankind. The cliffs behind the beach are of particular geological interest and a fossil hunt with the little ones will likely produce some fascinating finds.

Away from the cliffs the sandy beach is ideal for traditional seaside fun like sandcastle building while it’s also likely you’ll see the odd kitesurfer out on the water. Go back up onto the cliffs if you fancy stretching your legs on a long walk with views from the famed Tennyson Trail.

Food & drink nearby: Compton Bay is in the unspoilt Isle of Wight AONB so you will have to travel away from the beach if you’re getting peckish. The Sun Inn at Hulverstone is nearest the beach itself or drive along to The Hut at Freshwater’s Colwell Bay for food and views to the mainland. 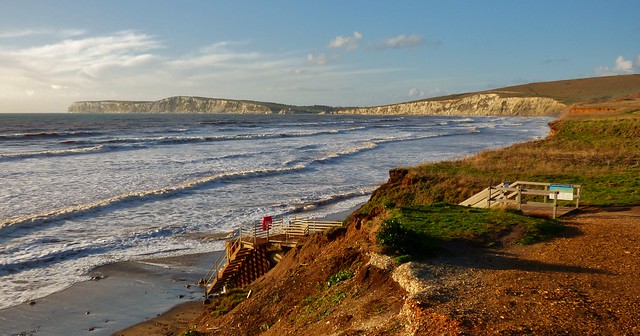